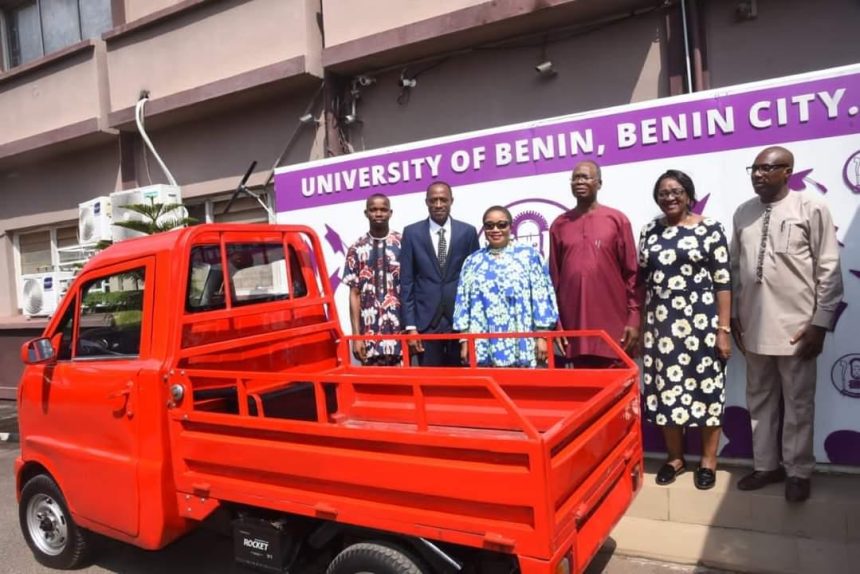 A Ph.D student of the Faculty of Engineering, University of Benin, is making many Nigerians feeling excited and inspired as he has produced and showcased a one-ton utility truck.

Netizens, as Nigerian citizens are called online, are saluting the candidate, Igbinosa Eghosa, who developed the vehicle, while also commending the university.

Eghosa is of the Department of Production Engineering and is supervised by Professor Akaehomen Ibhadode, who also led the team to present the wonder on wheels to the University’s Management.

According to a statement from UNIBEN, speaking during the brief ceremony, the project developer opined that the light-weight truck will re-shape and power the growth of the nation’s transport and agriculture industries. He added that with adequate funding, the vehicle could be produced in large quantity as the design was capable of addressing transportation needs even in local communities.

ALSO READ: 72 UNIBEN students get N250,000 scholarship each from FG

On his part, the project supervisor pointed out that over 80 percent of the materials used for the production of the truck, which runs at a maximum speed of 75km per hour, was sourced locally. He said the motivation behind the project was to encourage and promote the production of low-cost vehicles with very high local content including materials and labour, in Nigeria.

Elated, the Vice Chancellor, Professor Lilian Salami, praised the team for promoting local production through their cutting-edge innovations. She expressed the University’s readiness to partner with the Faculty in the production of some units of the vehicle for the Institution’s use.