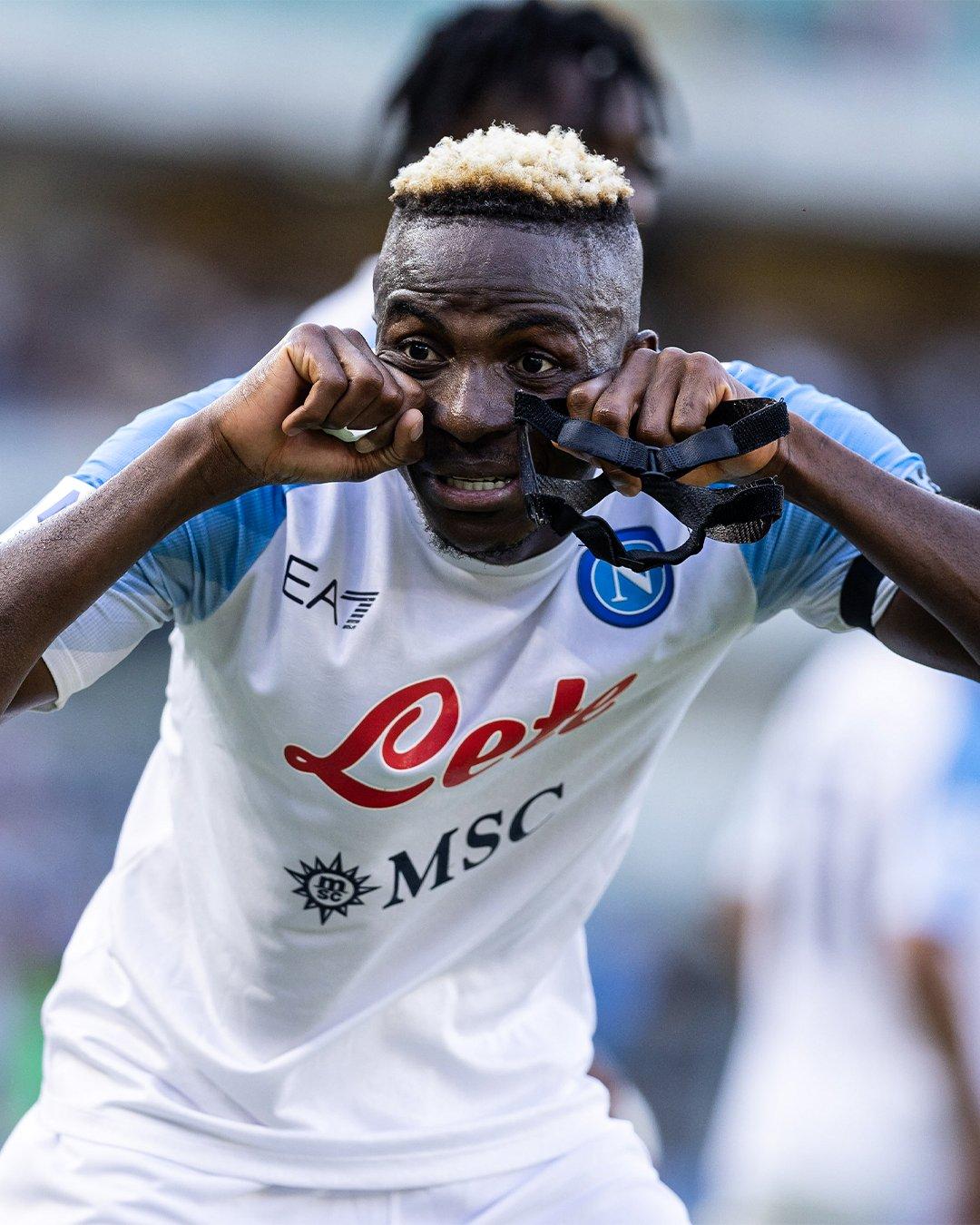 – Napoli fought back from a goal down to dominate Verona 5-2 at the Bentegodi, with Kvicha Kvaratskhelia contributing a goal and assist on his Serie A debut.

– Giovanni Simeone moved from Hellas to the Partenopei this week, but was not in the squad to face his former teammates. Neither was Fabian Ruiz ahead of a transfer to PSG, with Gianluca Gaetano suspended. Verona had Miguel Veloso and Federico Ceccherini sit out bans.

– The hosts wore a special jersey replicating the one Claudio Garella wore in goal when winning the Scudetto in 1984-85, as he died last week. There was a minute’s silence, as he also won the title with Napoli.

Also Read: Osimhen opens up on ‘near-death’ injury at Napoli

– Piotr Zielinski’s scorcher was fingertipped out from under the bar and Kvicha Kvaratskhelia drilled wide, as Napoli dominated possession while Verona waited to counter.

– The first real Hellas chance was a sudden Martin Hongla snapshot from distance that Alex Meret fingertipped over the bar. The resulting corner was flicked on for Kevin Lasagna’s cushioned volley at the back post to give Verona the lead.

– Napoli did equalise when Chucky Lozano’s cross from the right floated over Osimhen, but was right for the head of Kvaratskhelia to score on his Serie A debut.

– The visitors turned it around with a goal almost identical to Verona’s, this time a corner was flicked on by Giovanni Di Lorenzo for Osimhen to stick out a long leg at the back post. His celebration mocked some in the crowd who had been hurling racist abuse.

– Straight after the restart it was 2-2, as Marco Davide Faraoni’s cross found Thomas Henry with a totally free header, having peeled away from the centre-backs. Curiously, Lasagna got a knock to the face and needed treatment for a nosebleed during the celebrations.

– Napoli restored their advantage with a well-worked goal, Kvaratskhelia with an inspired slide-rule pass to send Zielinski clear and keeping his cool to beat the on-rushing goalkeeper.

– Stanislav Lobotka gathered in midfield and cut inside to place a precise side-foot finish into the far bottom corner for 2-4.

– Matteo Politano came off the bench for the fifth goal with a well-worked team move. He started it in midfield, combined with Giovanni Di Lorenzo and Osimhen’s flick laid it off for Politano to sweep in from 12 yards first-time.

– Adam Ounas came off the bench and scored within 90 seconds after combining with Politano, but it was disallowed for Alessio Zerbin’s foul on the goalkeeper.

– Zerbin should’ve scored moments later, but his first touch was terrible when sent clear on goal by Politano.

📄 Azzurri get off to perfect start in Verona ⬇️#VeronaNapoli 2-5