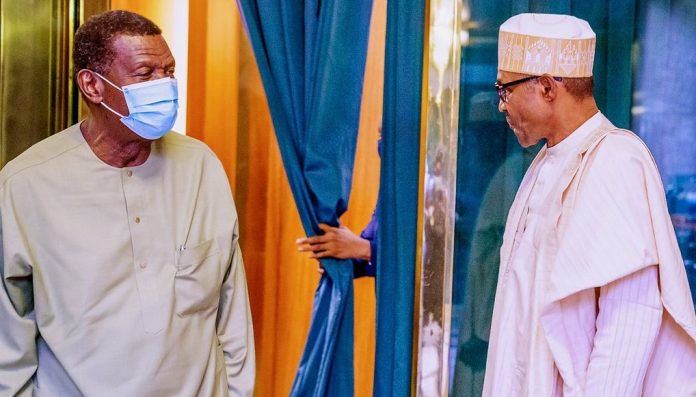 Pastor E. A. Adeboye is hardly seen as a controversial cleric but his insistence on using Twitter as a matter of human right makes it the third time he would dare the Muhammadu Buhari government in recent times.

The government has banned Twitter operations in Nigeria but Adeboye, on Monday, continued to tweet, saying the international human right charter guaranteed people freedom of expression.

Last November, he had also surprised many people when he spoke unapologetically in favour of restructuring.
The Buhari government has not come out as one that wants the country restructured, at least, in the major political sense that a lot of Nigerians advocate.

Speaking at the 60th Independence Day Celebration Symposium organised by the RCCG and the Nehemiah Leadership Institute, Adeboye had said, “Why can’t we have a system of government that will create what I will call the United States of Nigeria? Let me explain. We all know that we must restructure. It is either we restructure, or we break up, you don’t have to be a prophet to know that. That is certain – restructure or we break up.”
He then gave an idea of how the restructuring could work.

In the same October, Adeboye also openly identified with youths who were protesting against the continued existence of the SARs police.

Based on how the protest rattled the polity, and the anger Buhari later deployed to the conflict, the action of the General Overseer of the Redeemed Christian Church of God amounted to rebellion, especially coming from him.
Adeboye had noted in a tweet: “Our daughters will not be able to prophesy and young men will not see visions if we don’t keep them alive. I support the youths in this peaceful protest as they “speak up” to EndPoliceBrutality!#EndSARS #ENDSWAT.”

During the protest, his wife, Foluke Adeboye, had also provided support for the youths who resolutely gathered in Lagos, with reports saying he provided them with food and other related essentials.

Apart from the fact that Adeboye blessed the Buhari aspiration in 2015, the church has in the government one of its elders, Professor Yemi Osinbajo.

It is thus expected to normally be in its cordial book.

But, observers note, the failure of the government in certain critical areas, especially security, might have frustrated an Adeboye.

Not too surprisingly, he too can be said to have experienced some heat from the authorities.
Not long ago, the government had, for instance, invoked a law that stipulated that he could not continue to be the General Overseer of the church.

Although the relationship between Adeboye and Buhari is always not in the controversial sense, as they have shared perspectives on various issues, it has nevertheless been this dramatic.

The drama reared its head on Monday when the cleric defiantly tweeted: “The Redeemed Christian Church of God is domiciled in more than 170 Nations & Territories. The tweets here are in accordance to Article 19 of the UN universal declaration of Human Rights.”

What happens on the matter in the coming days will further define their relationship, with the government giving the impression that Adeboye and others believed to have violated the ban will be prosecuted.

Interestingly, these include a ruling All Progressives Congress Governor, Nasir el-Rufai; and Deeper Life church founder and pastor, W.F. Kumuyi, who had all along been known to be an anointed friend of the administration.

Joe Igbokwe to Abaribe over IPOB wear: You are an elder for nothing

Election postponement is hand of Esau, voice of Jacob – Atiku