History-in-jersey player, Cristiano Ronaldo, has continued to prove that he is a phenomenon.

The zeal and vigour he is deploying to playing, mobilising and winning for his beloved country Portugal in the ongoing Euro 2020 are so great and real that you would think he is just chasing stardom.

But the bevy of crests around his neck readily shows that it is stardom, limelight and history that appear to be telling him, ‘Together forever’.

Apart from the highly inspiring words with which he ushered in the tournament, his reaction to his bosom country Portugal’s pounding of Hungary 3-0 shows that he is bringing everything within his wit bank into the fiesta.

He noted on his Facebook page last night: “You have to know how to suffer, fight to the end and always believe with all strength. There are no easy opponents and no match win. The European Championship is a luxury stage where only the best of the best are and where each victory has to be won with all the claw and selflessness. Great win team Let’s pursue our goal! Força Portugal! Let’s go with everything to give another joy to the Portuguese who have been so supportive of us!”

He gleefully shared the photos here alongside the post. 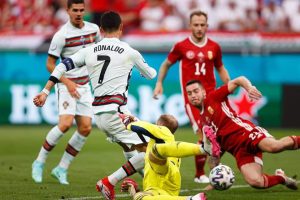 ‘How my son was strangulated for blasphemy when Pantami was Chief...