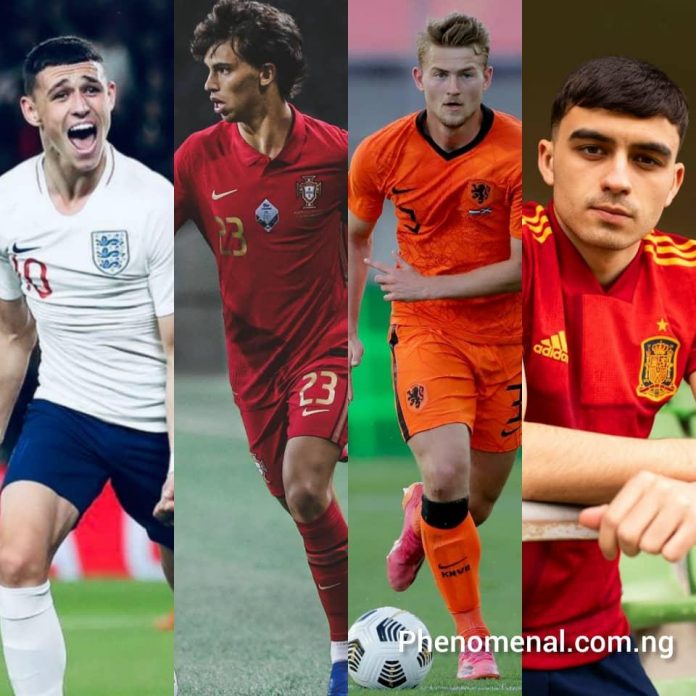 – Ahead of the start of Euro 2020 on Friday, we select 10 of the continent’s brightest young stars to watch at the tournament.


The player of the tournament when England won the Under-17 World Cup in India in 2017, Foden is now set to be unleashed on a full international competition for the first time at the age of 21. He is coming off a superb season at Manchester City in which he starred in Pep Guardiola’s Premier League title-winning side, regularly cutting in from the left flank and contributing 16 goals in all competitions and winning the young PFA player of the year 2020/2021 season.

Foden made his full England debut last September and scored his first goals against Iceland in the Nations League in November.

– PEDRI
Following in the footsteps of the likes of David Silva and Pedro Rodriguez before him, Pedri is the latest star to emerge from the Canary Islands and break into the Spain set-up.

The slight 18-year-old midfielder with the silky touch, who comes from Tenerife, joined Barcelona last year from Las Palmas. Growing up he modelled himself on Andres Iniesta and he wasted little time establishing himself at the Camp Nou, playing in all but one game in La Liga for Barca in the season just finished. He made his Spain debut in a World Cup qualifier against Greece in March.


The 18-year-old Bayern Munich and Germany midfielder was born in Stuttgart but could have been lining up for England at the Euro. His father is British-Nigerian and he moved to England with his family aged seven. He has represented both Germany and England at youth level too. “I have a heart for Germany and a heart for England,” he told The Athletic earlier this year.

However, he left the Chelsea academy set-up to join Bayern in 2019 and committed his international future to Germany in February, just before signing a new five-year deal at his club. Shortly after that he was given his full Germany debut in a World Cup qualifier against Iceland.

– MATTHIJS DE LIGT
Centre-back De Ligt is still just 21 but his importance to the Netherlands cannot be understated, especially with Virgil van Dijk ruled out of the Euro. That explains the concern for his fitness when he appeared to suffer a groin injury in training at the weekend.

Dutch coach Frank de Boer needs De Ligt, who captained Ajax in the Champions League aged just 19, starring in the side that got to the semifinals of that competition in 2019 before being sold to Juventus in a world-record deal for a defender, the fee an initial 75 million euros ($84.2m).

A symbol of the new Dutch generation after the Oranje missed both Euro 2016 and the 2018 World Cup, De Ligt made his full international debut as a 17-year-old.


Amid concern for the fitness of Kevin De Bruyne and the form of Eden Hazard, Doku could have a notable role to play for Roberto Martinez’s side.

The winger who only recently turned 19 broke through at Anderlecht and made his full Belgium debut last September, just before Rennes paid a club record 26 million euros ($31.6m) to sign him. Doku needed time to adapt to his new surroundings but finished the season strongly in France and can be a threat on either flank.

– JOAO FELIX
The 21 years old became one of the five most expensive players in history when still a teenager after Atletico Madrid agreed to pay 126 million euros ($142m) to sign him from Benfica in 2019.

Capable of playing on either flank or through the middle in attack, Felix broke through at Benfica and is fresh from helping Atletico win La Liga. He is also a symbol of the new Portuguese generation that will support Cristiano Ronaldo at this Euro as Fernando Santos’ team defend the title they won in France in 2016.

Bastoni played a vital role in Inter’s Serie A title-winning campaign but is still relatively inexperienced at international level with only five caps to date. An intelligent centre-back, who can hit a precise long pass and rarely throws himself into tackles as he prefers to wait for his opponent to make the first move, Bastoni impressed in Antonio Conte’s back three for Inter, mainly playing on the left side of the trio. For Italy, the presence of captain Giorgio Chiellini (who is also left-footed) obviously makes it harder for Bastoni to claim a starting slot if they play a back four but he was given a chance in the friendly win over Bosnia and Herzegovina.
However, given that Chiellini is 36, Bastoni won’t have to wait long to be promoted as his natural successor.

– NUNO MENDES
Nuno Mendes is reportedly being tracked by top clubs like Manchester City.
Drafted into the Portugal squad as a traditional left-back, he mainly operates as a wing-back at club level for title winners Sporting and will compete with Raphael Guerreiro for a place in the starting XI at Euro 2020.
One of the most exciting young players in Europe, Mendes’ energy and stamina make him a threat throughout the game and he defends attentively and diligently while he’s a real menace going forward too. His ball progression in the transitional phase can especially hurt opponents and he is certain to be scouted by all the European powerhouses this summer.

– ERIC GARCIA
Garcia has suddenly (some would say prematurely) emerged as the go-to man to resolve the defensive woes of both Spain and Barcelona — quite a daunting task for a 20-year-old with just 11 Premier League starts in his senior career to date. As a product of Barcelona’s La Masia academy, who spent the latter part of his formative years with Pep Guardiola at Manchester City before returning to Camp Nou on a free transfer this summer, Garcia is a centre-back with exceptionally good feet.
With a passing accuracy well into the 90% range, he’s accustomed to building from the back, can evade pressure and knows how to start an attack. For all his capabilities on the ground, he also times his aerial challenges well.


The son of France legend Lilian Thuram, the 23-year-old is a versatile forward who can add value in attack, particularly down the left. He brings excellent aerial ability (useful in attacking and defensive set-pieces), directness in the last third and tends to speed up the tempo of the game as he plays with few touches. Though Thuram prefers to play wide left in the attack, he is comfortable in any role up front, including centre-forward.
Sent from Yahoo Mail on Android