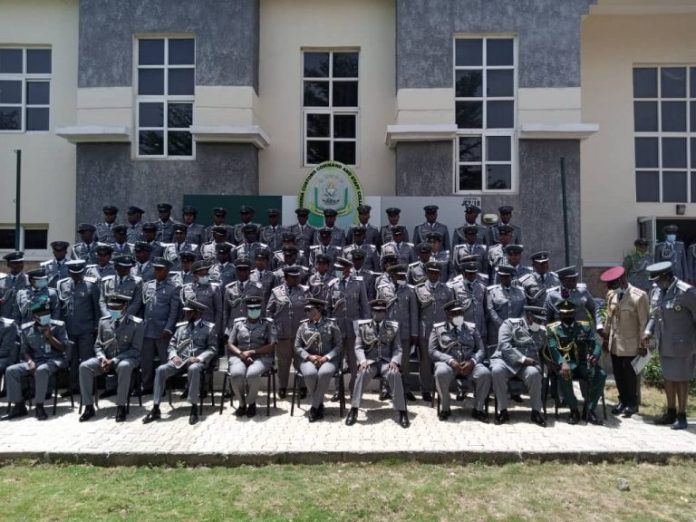 Col Hameed Ali (Rtd), the Comptroller-General of Nigeria Customs Service (NCS), says henceforth, officers and men will be measured for career growth based on knowledge and skills acquired in service.

Ali said this at the Graduation Ceremony of Junior Course 9 at Nigeria Customs Command and Staff College, Gwagwalada, FCT on Friday.

Represented by Deputy Comptroller-General in charge of Strategy and Research, Mrs Ronke Olubiyi, the customs boss noted that knowledge and skills had become a prerequisite for promotion and posting.

He said to deal with multi challenges of modern customs, knowledge, skills and discipline were paramount.

“We are entering into an era where your future will now be determined by what you know rather than who you know.

“Your growth will depend on your capacity to deal with multi challenges of modern customs,” he said.

Ali assured that NCS under his leadership would ensure continuous training programmes for both junior and senior officers of the service.

He said capacity building was now a priority in the service, adding that officers and men due for short courses would be granted.

He tasked the graduating students to be more committed and disciplined as well as become ambassadors of the college.

In his remarks, the Commandant of the college, ACG, Adewale Adeniyi, said 40 students were graduated from Junior Course 9, adding that about 400 personnel had been graduated in the last three years.

Adeniyi said the graduating officers had been moulded in character and learning, hence there was high expectation from them while discharging their duties.

Mrs Opayemi Itulua, who won best graduating student and other two awards, expressed gratitude to God and customs management for the opportunity to be part of the course.

Itulua said though she was surprised for winning three awards but added that she worked very hard during the programme.

She stated that the development had encouraged her to be more committed and put in her best while discharging her responsibility.