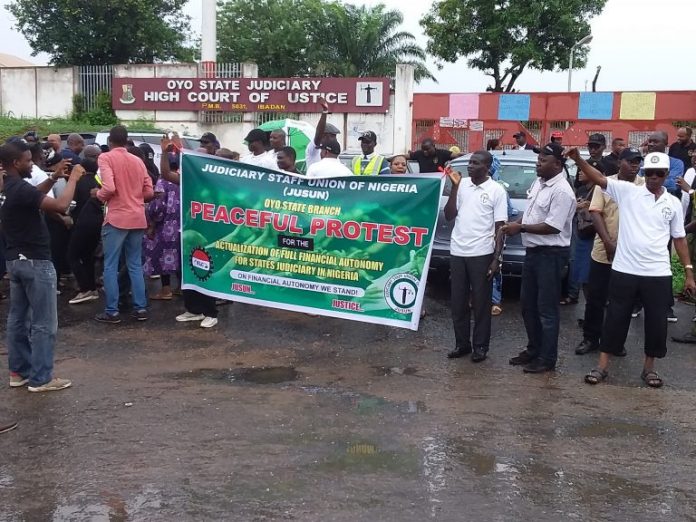 The leadership of the Judiciary Staff Union of Nigeria (JUSUN) and Parliamentary Staff Association of Nigeria (PASAN)in Oyo State says the strike continues, until their demands are met.

On April 6, JUSUN Judiciary workers, under the aegis of the Judiciary Staff Union of Nigeria (JUSUN), embarked on an indefinite nationwide strike demanding an enforcement of constitutional provisions and court judgments granting financial autonomy to the judiciary at both the state and federal levels.

JUSUN and PASAN, made this known during a peaceful protest jointly organised on Thursday in Ibadan to further press their demands and carrying placards with various inscriptions.

The Oyo State JUSUN Chairman, Kayode Martins said the financial autonomy being requested for would enable the judiciary to function effectively without any interference from the executive arm.

Martins said the autonomy would ensure checks and balances among the arms of government and democracy would have its strong hold in Nigeria.

“What we are asking for does not only affect the Judiciary and legislative arms but affect the whole society.

“If anything goes wrong, you run to the Judiciary being the last hope of the common man.

“If the judiciary does not have autonomy, it will be difficult to change the wrongs in the society and as well challenge some policies of the executive,” Martins said.

He called on the state governors to uphold the constitution and do the right thing by granting their autonomy.

In his address, the Oyo State PASAN Chairman, Mr Yemi Alade, said the association wants the agreement reached with the governors to be documented.

Alade said that the strike would continue until their demands on financial autonomy are met.

“Not until those agreement are met and documented, the strike will continue. What we are fighting for is fundamental and constitutional,” Alade said.

The Vice Chairman of the Nigerian Bar Association (NBA), Ibadan branch, Mrs Delayo Orieku, said what the legislature and judiciary are fighting for are their constitutional rights.

Orieku said the NBA are solidly behind them and called on the governors to obey the constitution and grant their demands.

NAN reports that a verdict of the Federal High Court in Nigeria’s capital, Abuja, had in January 2014, held that financial autonomy for the judiciary is a constitutional provision that must be complied with by the executive branch of government.

NAN reports that on May 23, President Muhammadu Buhari signed into law the Executive Order to grant financial autonomy to the legislature and the judiciary across the 36 states of the country.

The order also mandates the accountant-general of the federation to deduct from source amount due to state legislatures and judiciaries from the monthly allocation to each state for states that refuse to grant such autonomy.

The Minister of Justice, Abubakar Malami, the Executive Order No. 10 of 2020, made it mandatory that all states of the federation should include the allocations of both the legislature and the judiciary in the first-line charge of their budgets.

According to the AGF, “a Presidential Implementation Committee was constituted to fashion out strategies and modalities for the implementation of financial autonomy for the State Legislature and State Judiciary in compliance with section 121(3) of the Constitution of the Federal Republic of Nigeria, 1999 (as Amended).”

NAN reports that the Nigeria Governors Forum (NGF) said they will start implementing financial autonomy for the judiciary latest by May ending, a pledge that indicates that an end to the ongoing strike that has crippled the nation’s judiciary may be in sight.

The governors also called on striking members of the JUSUN to call off their two weeks old strike.

The chairman of the NGF, Gov. Kayode Fayemi of Ekiti, gave this assurance in an interview with journalists after meeting with ‘stakeholders’ from the state judiciary and legislature at the Presidential Villa in Abuja.

He said the modalities for the implementation were worked out at the meeting held at the Presidential Villa.

The first line charge status, which is being respected by the federal government in respect of the federal judiciary, entitles the state judiciaries to get funds due to them directly from the federation account.

The governors rushed to court in 2020 to challenge an executive order signed by President Buhari for the enforcement of the first line charge status of both the state judiciary and legislature.

They argued that executive order which directs the accountant-general of the federation to deduct funds meant for the state judiciaries and legislatures in the federation account and pay it to them was “unconstitutional”.

2.5bn people projected to have hearing problems by 2050 – WHO