In Reflections, A Maestro Goes Down Memory Lane

Even decades after graduating in Performing Arts from the University of Ilorin, it is impossible to forget Dr Yemi Ogunbiyi’s Drama and Theatre in Nigeria: a critical source book. I do not know what they teach in history of theatre in Nigeria classes these days, but this voluminous book was the locus classicus for the subject in my days in school. Now reading Femi Akintunde-Johnson’s Reflections on Nigeria’s Movie Industry: salute to pioneering creativity & perseverance takes me down that lane of memory evoking nostalgia.

Unlike Ogunbiyi, the man we admirably call FAJ did not set out to produce a reference document of academic dimension (even though he is more than competent to do that with enviable success), yet his 166- page e-book provides the historical trajectory that Ogunbiyi gives drama for the emergent film industry.

And in doing that, the veteran journalist, media entrepreneur and newspaper columnist, spurns the faulty narrative, which sells Nollywood, Nigeria’s globally recognised film venture as an outright new-born, whose formation has no precursory. His intervention, perhaps for the first time, sets the record straight by building an evolutionary block of personalities on whose back the structure that can now be described as Nollywood was birthed. 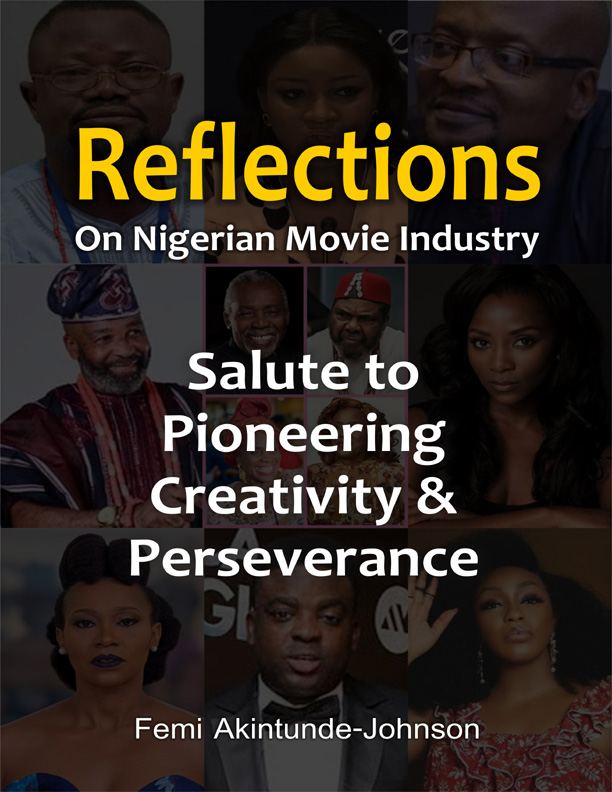 Right from the start as on the stage to television, the production of films on celluloid and the economic happenstance, which necessitated the invention of cheaper options that included the video, Akintunde-Johnson’s Reflections on Nigeria’s Movie Industry boldly tells that there could be no forest now known as Nollywood without the trees grown by people like Hubert Ogunde, Duro Ladipo, Kola Ogunmola, Oyin Adejobi all of whom he described in the first section of the book as “incomparable progenitors.”

These forebears, while still plying their trades, on a variety of platforms, became the inspiration for “the generalissimos of the genesis,” who then dared to explore otherwise uncharted territories and built a pipeline of professionals that emerged as channels of sustenance for the film industry (when economic hardships snuffed prospects out of celluloid production).

The generalissimos, most of whom have currently transited into heavenly planes, include, Olusegun Olusola, widely recognised as black Africa’s first television producer and creator of evergreen Village Headmaster; Moses Olaiya Adejumo, magician, musician, comedian, actor and filmmaker who is believed in certain quarters to have pioneered the “capturing of Nigeria’s dramatic plots on video cassettes (Video Home System) and reasonably so following his battle with piracy; Ola Balogun, arguably the first cinema director on the shores and noted to have influenced the work of most of the early practitioners; Ade Afolayan (Ade love) product of the Moses Olaiya ensemble who was an actor, producer and director as well as Eddie Ugboma, actor, director producer, film administrator and activist. Even though not expressly, FAJ seems to suggest that the foundation that was laid by this category of persons especially, made Nollywood a reality when its time was come.

For instance, quoting Chris Obi-Rapu, director of Living in Bondage, the film credited to have pioneered the commercial essence of Nollywood, (if not the production of films on VHS), from an article written by veteran Uzor Maxim Uzoatu for The Week in 2018, FAJ offers in: “What made Nigeria’s home video industry take off was the input from Okey Ogunjiofor and my direction. Nobody has wanted to do anything in Igbo and Yoruba amongst television producers then because they felt it was degrading. There had been shootings of Yoruba and Igbo videos. Mike Orihedimma recorded Igbo videos in Onitsha while NEK was recording and marketing Yoruba videos in Lagos. They were poorly produced and hardly ever directed. It is a known fact in filmmaking that it is the director that makes the film. If I had not shot Living in Bondage and Taboo, there could not have been any Nollywood. This film business really took off because Living in Bondage was well shot as at that time. If I had not stood my ground the financier could have influenced the production and direction in a negative way, I resisted him because I knew that he lacked the knowledge of filmmaking…” The question then arises, does the director make a film or the financier. And in the case of this director with pedigree from the Nigerian Television Authority, which aired Olusola’s 1958 creation, Village Headmaster from 1968, a nexus has been established.

Reflections thereafter focuses on other groups like “the pathfinders, “the impresarios across the ages,” “the masterminds of Nollywood,” “the reigning halcyons” and “distinguished mentions.”

In all of these sections, you have a near avalanche of names that clearly tells that filmmaking has become what it is today by the effort of a colony of committed practitioners. People like Ojo Ladipo, Adebayo Salami, Lanre Hassan, Pete Edochie, Olu Jacobs, Taiwo Ajai-Lycett, Wale Adenuga, Lola Fani Kayode, Amaka Igwe, Zach Amata, Tunji Bamishigbin, Zeb Ejiro, Rita Dominic, Peter Igho, Tunde Kelani to name a few.

There sure are many ways this book could have been better, but FAJ, unsurprisingly pre-empts us all by frontloading a caveat! He starts with the title of the book, which puts his writings in the sphere of personal reflections that does not have to align with the expectations of others. Doesn’t everyone have a right to their reflections and how they choose to share them?

More importantly he gives what he calls a “caveat apologia” on page five of the book. This addresses some of the queries you might want to raise about the book that was been under the works for close to a decade.

For instance, wouldn’t categorising these professionals along the lines of their callings have been more effective? What exactly is the parametre for choosing those highlighted, especially amongst contemporary practitioners? Could there have been a more chronological arrangement in such a way that you don’t read about Jeta Amata before his father, Zack and uncle, Fred or a Genevieve Nnaji before the multi-level players, Mamood Ali Balogun and Femi Odugbemi? Doesn’t the section “distinguished mentions,” come like an afterthought? Those are all stuff that FAJ, being what he is- a compelling intellectual who’s confident about the direction he has chosen addressed on page five ahead of the excitement of any exuberant critic.

In all, Reflections on Nigerian movie industry is a compendium of honour for those who have brought the Nigerian film industry to where it is today. It is the account of someone who has in the main, played active roles as a reporter, commentator, friend and collaborator to many of the practitioners yet dug deep researching into facts that each of all of these roles may have made opaque or covered up entirely.

It is breezy without being pedestrian and intellectual without alienating any reader who seeks knowledge. This book at once, sets the records straight, venerates those to whom honour is due and inspires opportunities for further scholarship on the subject matter. It is recommended for everyone whose feet itch for a role in the variety of opportunities that the Nigerian film industry offers.

(Niran Adedokun is a writer, PR practitioner, journalist and author of ‘The Danfo Driver in All of Us’.)