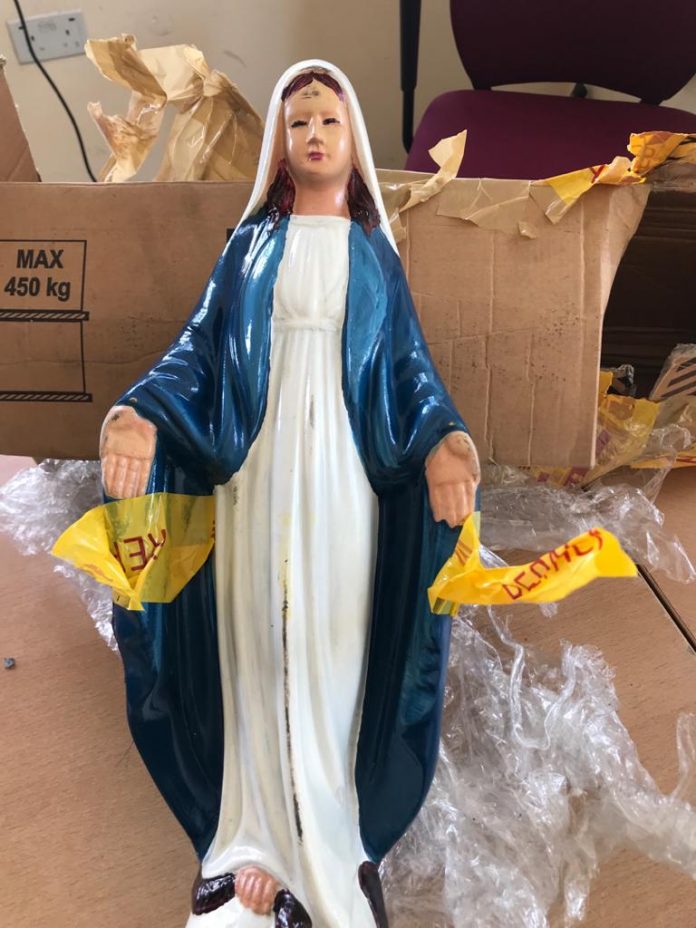 Dare-devil narcotics couriers who used the statue of Mary, Mother of Jesus, to conceal their illicit drugs have met their waterloo in Lagos.

NDLEA operatives embedded in two courier companies intercepted the drugs concealed in the statue and some in auto spare parts to be despatched to Canada and the United Arab Emirates (UAE).

Its Director, Media and Advocacy, Mr Femi Babafemi, stated on Saturday in Abuja that 140grammes of Methamphetamine packaged in the statue of Mary was seized in one of the courier companies.

The drug was to be delivered in The Philippines.

Babafemi added that 500grammes of heroin concealed in auto spare parts heading to Canada were also intercepted at a second courier company.

The two packages were to be delivered at the UAE,

In a related development, the NDLEA arrested 31 suspects in Ondo State for being in possession of 276 kg of assorted illicit drugs. Those arrested included seven females.

They were arrested during a two-week raid which began on April 6.

Babafemi said that the sting operations were carried out to curb the increasing rate of drug abuse among youths and even the elderly in Ondo State.

He added that the illicit drugs seized were 74.285kgs of Indian hemp, 267grammes of other psychotropic substances; 201kgs of “skuchies’’ (a combination of Indian hemp, tramadol, ethanol, and “Zobo’’).

NDLEA dismantled or destroyed most of the vending spots where the drugs were being dispensed, he said.

In Akwa Ibom, the NDLEA also seized 62.150kg of illicit drugs in Oron and Uyo.

Babafemi quoted the NDLEA Commander in the state, Mrs Obot Bassey, as saying that four suspects were arrested in two sting operations conducted on April 22 and April 23.

He stated that NDLEA Chairman, retired Brig.-Gen. Buba Marwa, had commended operatives in the two states and those of Operations and General Investigations Directorate in Lagos for their steadfastness.