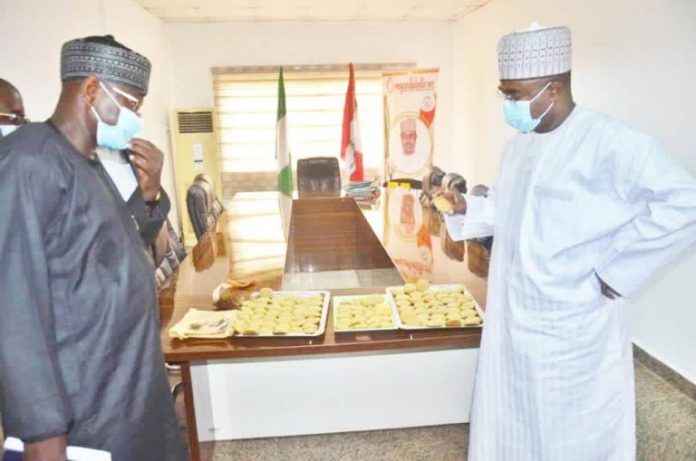 The National Drug Law Enforcement Agency (NDLEA) will go after owners and operators of supermarkets and confectionery selling cookies, biscuits and other products laced with illicit substances.

Rtd Brig.-Gen. Buba Marwa gave the warning while receiving further briefing on follow-up operations from the Commander, NDLEA in the FCT, Mohammed Sokoto over the arrest of a 300-level university student, Rhoda Agboje and her boyfriend, Ifeanyi Nwankwo.

Both suspects who were arrested on Tuesday, specialises in producing and selling drug cookies to school children, clubs and supermarkets in Abuja.

Marwa gave the warning in a statement by the agency’s Director Media and Advocacy, Mr Femi Babafemi on Friday in Abuja.

”The NDLEA will henceforth go after supermarkets as part of preventive measures.

”This include, clubs, confectionery and other outlets and their owners, selling cookies, biscuits, cakes and other products laced with illicit substances under whatever guise.

”We will not shy away from hitting their production spots, supply and sales outlets before they get into the hands of innocent schoolchildren, unsuspecting members of the public and even our vulnerable young men and women.

“We will not rest on this until we chase them out of this criminal business. This is why I want to seize this opportunity to warn owners and operators of supermarkets, clubs and other sales outlets to clean their stores of these illicit substances before we get to them, ” he said.

Marwa said the cookies in Abuja laced with drugs were packaged in designed paper wraps under the name “Function” with its motto as “function right with every bite.”

He said that at the back of the package was a quote the suspects attributed to God to justify their illicit trade quoting as “Behold, I have given you every herb bearing seeds, which is upon the face of all the earth, and every tree, in which is the fruit of a tree yielding seed; to you it shall be for food.”

NAN reports that Narcotics agents with the NDLEA command of the FCT, uncovered a syndicate involved in producing the cookies with Arizona, a highly psychoactive variant of cannabis; alcohol and rohypnol among other ingredients.

In another development, the Emir of Keffi, Dr Shehu Chindo-Yamusa III has asked the NDLEA take over a rehabilitation centre being constructed in Keffi through community efforts.

The traditional ruler made the plea when he paid a courtesy visit with other leaders of his emirate to Marwa for his outstanding commitment to the fight against drug abuse and trafficking in Nigeria.

“We have come to plead with you to take over the rehabilitation centre we started as a first class drug treatment facility through private efforts in Keffi.

“We are doing this because we know the damage drugs can do to any nation. With proper funding, the centre can handle the rehabilitation needs of the entire North Central and even most parts of the North.
” If Keffi is at peace, Abuja will be at peace but if Keffi is on fire due to the menace of drug abuse, Abuja will equally be on fire due to its proximity to the FCT.

In his response, the NDLEA chairman commended the Emir for his support to the crusade against drug abuse and assured him of NDLEA’s preparedness to work with him to rid his emirate of the drug scourge.