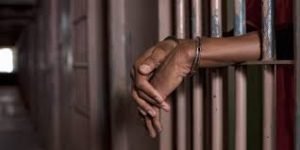 A 32-year-old man, Alex John, on Tuesday appeared in a Magistrates’ Court in Ota, Ogun for allegedly stealing printing ink worth N100,000, belonging to his employer.

The police charged John whose address was not provided with theft.

The prosecution counsel, Insp E.O. Adaraloye, told the court that the defendant committed the offence on March 24 at about 8.35 p.m.in Olympic Ink Company, No.48 Veepee Avenue, Ota.

Adaraloye said the defendant was caught by the security guard of the company while stealing two kegs of printing ink,

He said that the offence contravened the provisions of Section 390(6) of the Criminal Code Laws of Ogun, 2006.

John, however, pleaded not guilty to the charge.

Magstrate A.O. Adeyemi admitted the defendant to bail in the sum of N100,000 with two sureties in like sum.

Adeyemi ordered that the sureties must reside within the court’s jurisdiction and must be gainfully employed with evidence of tax payment to the Ogun Government.

She adjourned the case until April 8 for further hearing.

Lagos to generate $10bn in agriculture investment by 2025 – Sanwo-Olu

Peter Square to share money on his page next week