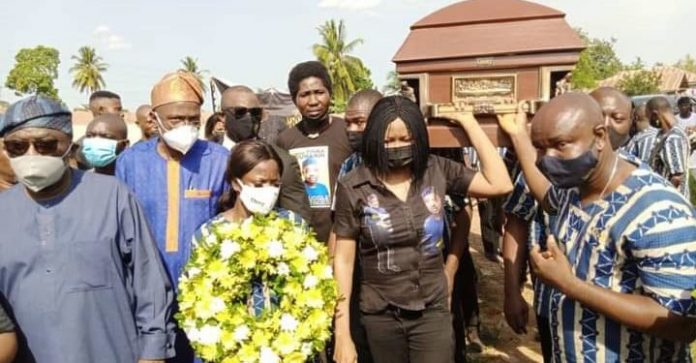 The Ooni of Ife, Oba Adeyeye Ogunwusi, Ojaja 11, said on Saturday that Afenifere spokesman, late Yinka Odumakin would forever be in the hearts of people of Yoruba extraction.

The Ooni, who was represented by Sooko Kemade Olagbaju, said this at Odumakin’s Funeral Service at Origbo Anglican Grammar School, Moro, in Ife North Local Government Area of Osun.

He said that while some had chosen to mourn his passing, the exalted throne of Oduduwa “has opted to celebrate” late dear Peter Olayinka Odumakin.

According to him, in death, as in life, he (Odumakin) remains an unforgettable national personality who is so dear to them.

“You were not only a worthy son of the House of Oduduwa, you lived Oduduwa land. You breathed Oduduwa. You worked tirelessly for Oduduwa.

“Your insightfully penetrative perspective on Yoruba cause is uncommon.

“Neither was your incisively biting criticism of our steps, delivered impassionately,” he stated.

He said Odumakin was a gift to the people of Moro, “the calmly rustic community in the northern fringes of Ile-Ife.”

According to him, people across Oduduwa land cannot appreciate him enough.

He added that as a token from the House of Oduduwa, “an ultra modern garden has been named in your honour in my privately owned Students Village in Obafemi Awolowo University where a dignified bronze bust (a statue of the head and shoulders of a person) will be unveiled in your eternal honor.”

Odumakin died on Friday, April 2, at 54 after battling with respiratory problems.

The remains of the late Afenifere spokesman arrived at his country home, Moro town in Ife North Local Government of Osun State on Friday.

A delegation of Osun State Government, led by the Chief of Staff, Dr. Charles Akinola, received the corpse at Asejire area, the boundary of Osun and Oyo states.