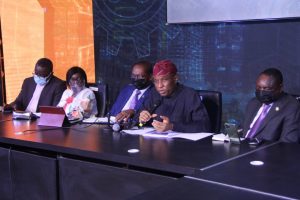 Lagos State generates over 14,000 metric tonnes of refuse on a daily basis, according to its Commissioner for Environment and Water Resources, Mr Tunji Bello.

Bello said this during the ministry’s 2021 Ministerial Press Briefing on Thursday, in Ikeja, to highlight the achievements of the Gov. Babajide Sanwo-Olu’s administration in two years.

He said that the quantity of refuse generated in the state was far beyond what the Lagos Waste Management Authority (LAWMA) evacuated daily, as some were being dump in other illegal dumpsites across the state.

The commissioner said that about 70 per cent of the waste in the state got to approved dumpsites, while the remaining 30 per cent was dumped at the illegal sites.

According to him, the state government, through the ministry, will ensure that the illegal dumpsites are closed down.

”LAWMA has successfully increased the number of trips completed daily at landfill from 357 to 850 on the average. We have witnessed growth of PSPs from 350 to 437 (87 new PSP companies).

”The period has also seen the acquisition of 210 new Compactors by the PSPs who have also employed over 8,200 people.

”LAWMA, during the period under review and due to the magnanimity of Mr Governor, Babajide Olusola Sanwo-Olu, has provided employment to over 30,000 residents.

”There is also a potential of 6,000 new jobs in recycling, but currently averaging 4,000 for both formal and informal. Nine hundred and fifty employees have been hired under our Waste Monitoring and Policing and another 350 are engaged as Street Captains.

”Other categories of people offered job opportunities are 300 Marine Waste employees, 14,010 Street Sweepers and another 3,500 under the Highway Managers,” he said.

The commissioner said that in line with the T.H.E.M.E.S Agenda, waste generation and disposal processes had been reinvigorated through circular waste recycling.

Bello said that the process would reduce the amount of waste generated and transported to the landfill sites, which were aready getting filled up.

He said that in fulfillment of the policy on Accelerated Local Content in Technological Development, 50 Dino bins were fabricated in-house at LAWMA headquarters.

The commissioner said that the LAWMA Academy, an educational institution established with the aim of fostering formal waste management education and certification training in Solid Waste Management, was commissioned in September 2020.

According to him, the Academy has successfully trained 56 youths under Internship Programme and Project Waste Sorting from source.

”The Blue Box Initiative was rebranded into Lagos Recycle Initiative in June, 2020. The initiative is a holistic approach to waste recycling in Lagos State for people to recycle their waste to achieve a Circular Economy.

”The Lagos Recycle Initiative has been established in 21 LCDAs with 23 recyclable waste collectors enlisted in these locations.

”The initiative has been extended to 42 LCDAs with 48 recyclers who collect recyclables from door-to-door, with a plan to extend to other LCDAs by the end of second quarter of Y2021.

”The agency also unveiled seven brand ambassadors to support the campaign for waste sorting from source and also bridge the gap with residents, to achieve a cleaner and safer environment.

“Most of these Ambassadors were chosen from the film industry,” he said.