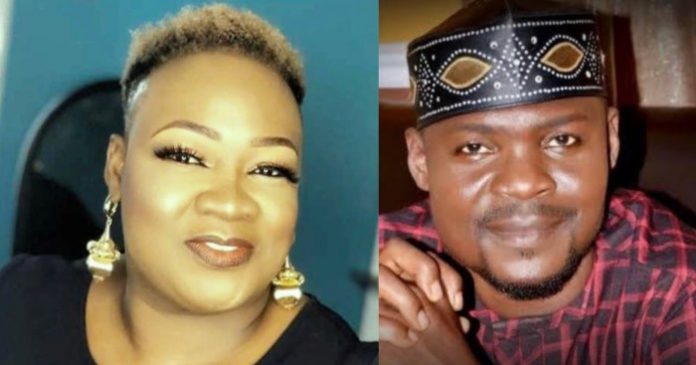 Lagos-based comedienne, Princess, has said that it was in her house that actor Baba Ijesha was caught defiling a girl.

Baba Ijesha is currently in police net after he was arrested for the alleged action.

According to Princess, the girl defiled was one of the children put in her care.

In an emotion-laden video she put on Instagram, she alleged that although the actor committed the act, it did not run for seven years.

The police in Lagos had said that the act went on for seven years.

Here is Princess narrating the alleged incident: “Some years ago, I had challenges with my marriage and I lost a baby. So some parents in my area, out of compassion allowed their children to stay with me so that I would not feel lonely. There were six of them, three boys and three girls. Now, Baba Ijesha had challenges and he came to me for help; so I tried my best. I registered him for a lesson, he sat for GCE and I tried to get him into UNILAG. In fact, he was enrolled. That day he wanted another help and I was not going out so I asked the three boys to go and play at their play spot down the street. My aunt had come to visit me and he was around. So when she was leaving, I had to go downstairs to lock the gate after her.

“I do not know what happened in the space of three to four minutes but, the following week, the school called me that I should come and see my children. They said the girl sat on her brother’s leg and was whining her waist. They called me and the parents of the children. The parents of the children are staunch born again Christians and I don’t allow them to watch anything even cartoons. If they have to watch cartoons, I must watch it with them.

“The parents said it could be spiritual so we started praying. He warned her not to tell anybody. He came back the next day to be sure if she had told anybody. He said that he bought fruit and she should follow him to carry the fruits from his car for everybody. When he got down, he used his key to defile her again. He did not come to my house again but anytime he needed help, he will call me.

“When I saw the news that people were saying he has been molesting her for seven years, saying so many things, I was shocked. Fine, he defiled her, he assaulted her and we just found out but he never came to our house again. He was dodging me. So whenever he needed my help, he calls me. At a point, I called him to scold him telling him that he needed my help but he was in his house; I didn’t have money and my wedding just ended. He apologised and said that he was shooting so I went to meet him. But I noticed that he was avoiding me but I did not know why.

“Then the child started failing in school. I paid for a private lesson. When I told my family, they told me that we should pray, maybe it was spiritual. The parents said that we should keep praying. They put the six children in my care because they believed that if I am surrounded by children, soon I will have mine. I kept on feeling that the child had changed. My family said that don’t I have faith? We should fast. Even the parents were fasting and praying. After two years, I felt the problem was not spiritual and that something was wrong. All the children are grown now and they are in the boarding house.
“My friend called the child and asked her what the problem was. She told us and I was shocked. I decided to call Baba Ijesha. I went to his page and wrote that he should check his dm. Because I was trying his number but it was not going through. He replied to me on Instagram. I told him that I wanted to shoot a movie and I needed him to come over. My mother and I had said when he comes we will sit him down and ask him if it was true. That day when he was on his way I remembered that my sister and friend told me that if we do not have evidence people will support Baba Ijesha. I called a CCTV company to install cameras, I told them it was a matter of life and death so they set up the camera. When we set the camera, we asked everybody to leave the house but the girl was afraid. We calmed her down. She had not seen him again since the incident until she saw him in a movie that we did together recently. When she saw him in the movie she was jittery but she could not say anything till she eventually opened up to us.

“When he came in he saw me and the camera installers, then he asked who they were but I said they were from a cable company. I told him that I was going out and I will stay long so he should relax. In two seconds that I had left the house, he checked everywhere in my house to ensure that no one was home or the children were sleeping. He checked the whole house for cameras, then he started. I cannot even begin to say the things that he did. My body was shaking because we were monitoring it on the phone. At a point when she stood up to go to the kitchen, I knew that there was no camera in the kitchen so people came in and we called the police. The police came immediately to pick him up.

“I asked him, Lanre, what did I do to you. Because you know I do not have a child, people kept these children in my care so that I will not over-think and you did this to me. He said that I was his benefactor but it was the devil. He was just talking rubbish. I asked him what happened seven years ago but he was just begging me. They took him away. Every day we go to the police station from morning till night. Ever since it happened I cannot sleep. Some people called trying to threaten me.”

The story of Davido’s mother

Why I rejected N8m to promote bleaching brand – Khafi