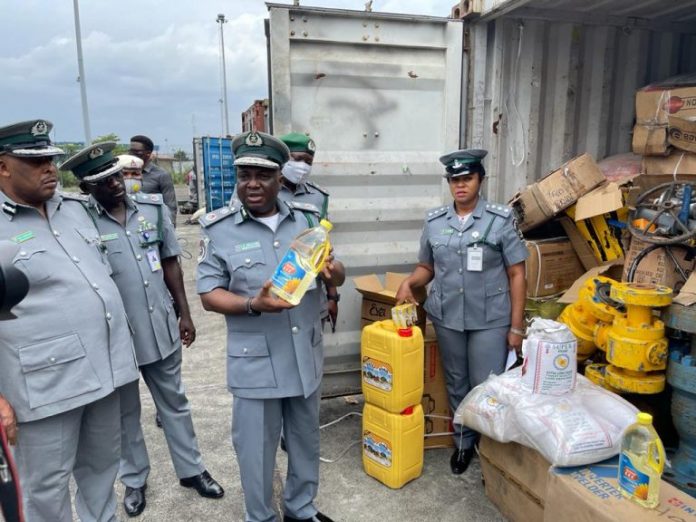 The command’s Comptroller, Auwal Mohammed, disclosed the figures in a statement issued by the command’s spokesperson, Mrs Ifeoma Ojekwu in Port Harcourt on Wednesday.

Mohammed said the command generated a total of N38.877 billion in January, February and March as part of efforts to improve the Federal Government’s revenue portfolio.

“The figure collected is 69.4 per cent higher than the N22.951 billion collected between January and March in 2020.

The comptroller further named other items seized to include auto spare parts; 310 pallets of laser ketchup and 20 bales of fabrics.

“A month by month breakdown of the seizures indicates that four seizures were made in January, consisting of three containers and two suspects – with a duty paid value of N85.988 million.

“In February, the command made three seizures, including four containers with a total duty paid value of N45.528 billion collected.

“Similarly, in March, we made five seizures, involving seven containers with a duty paid value of N3.989 billion collected,” he stated.

On export, Mohammed disclosed that the command processed 207,749 metric tonnes of cargoes with free on board value of 70.838 million USD comprising cash crops.

He said the command had recently recorded its highest monthly revenue collection of N13 billion since the command was established 38 years ago.

“So, I urge officers to avoid being complacent and keep doing more to improve the nation’s economy, security and trade facilitation.

“We are doing well but I believe there is room for improvement in revenue collection, anti-smuggling, trade facilitation and robust stakeholders’ engagements.

“We should block every likely or identified area of government revenue leakages to enable us sustain the tempo of maximum collections.

“This is because we owe Nigeria a duty to make smuggling of prohibited items impossible to come in through the command,” he told his officers.

Mohammed warned smugglers to steer clear of the command’s jurisdiction or face arrest and their goods seized in accordance with the Customs and Excise Management Act.

He stated that soon the command would deploy scanners to the port as well as apply due diligence in physical examination to achieve more results.