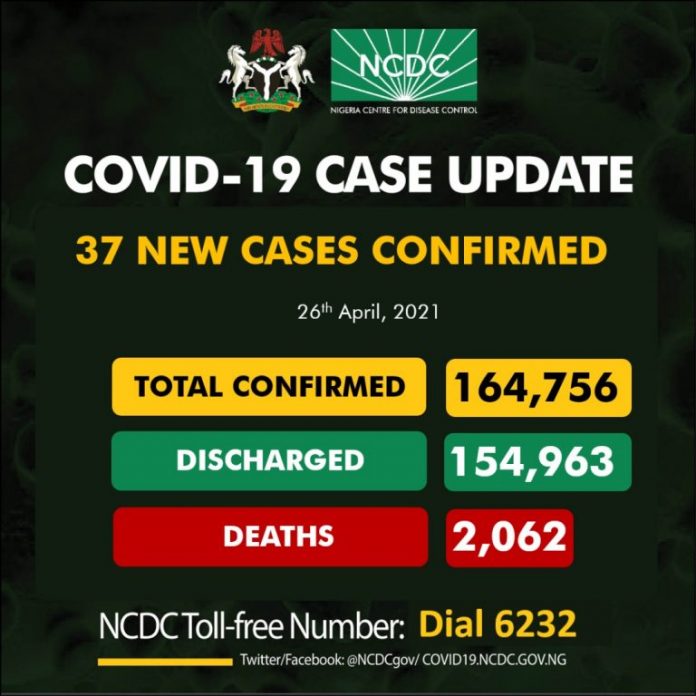 The Nigeria Center for Disease Control (NCDC) said it conducted 41,713 COVID-19 tests in one week, which brought the number of tests conducted in the country to 1,912,628.

The NCDC disclosed this on its official Twitter handle on Monday.

It said, however, that there was a downward trend in the number of coronavirus tests conducted each day.

The NCDC said it had focused on convincing Nigerians of the continued importance of testing, particularly for people with symptoms and people with co-morbidity who might have been exposed to the virus.

“We plead with all media outlets to continue with those important messaging to the general public, so that we do not set ourselves up for spikes and resurgence at this critical time when vaccines aren’t at 100 per cent to come by.

“We learned quickly in the early days of this public health crisis how important testing was to prevent the spread of the virus,” it explained.

The News Agency of Nigeria (NAN) reports that experts are worried about the decrease in the COVID-19 testing, fearing that the country could miss future surges.

It reports that experts said the dramatic drop could hamper epidemiologists’ ability to spot and stem new surges, months before enough of the population is vaccinated to reach herd immunity.

NAN quoted experts as saying the country could be slapped with a really disappointing surprise.

“The 37 infections reported on Monday marks an increase from the 35 cases logged a day earlier,” it said.

It added that zero COVID-19 deaths were registered, whike the total number of deaths in the country remained 2,062.

The agency disclosed that the new infections were registered from five states – Lagos 26, Ogun 4, Kaduna 2, Rivers 2, Kwara 2, and Edo 1.

The agency noted that 37 people had also been successfully treated and recovered from the virus from isolation centers across the country.

NCDC said that a multi-sectoral National Emergency Operations Centre (EOC), activated at Level 3, had continued to coordinate the national response activities in the country.

it said that across the country, many people have resumed hosting large gatherings, visiting markets or other places without face masks, while hand washing booths are disappearing and other measures previously in place.

“COVID-19 cases are more likely to spread when people gather without physical distancing, proper use of face masks and other measures.

“We are at risk of a surge in cases if people do not take action now,” it advised.

Meanwhile, NCDC says the introduction of stringent measures such as travel bans would be ineffective, if Nigerians did not take action at home.

“We cannot escape the basic logic of infectious disease spread,” it said.

The NCDC said many countries are recording increases in COVID-19 cases.

“India is currently battling with a steep surge in cases and is recording as many as 300,000 cases in one day.

The agency noted that the increase in surges was an important but devastating reminder of the impact of COVID-19, especially where no right action is taken.

“In India, a new variant has been identified but there is no sufficient evidence yet to tell us if this new variant is responsible for the increasing number of cases.

”This variant has also been identified in 17 other countries, including five cases in Nigeria “ it disclosed.

Davido is an angel, singer’s PA says after getting a brand...