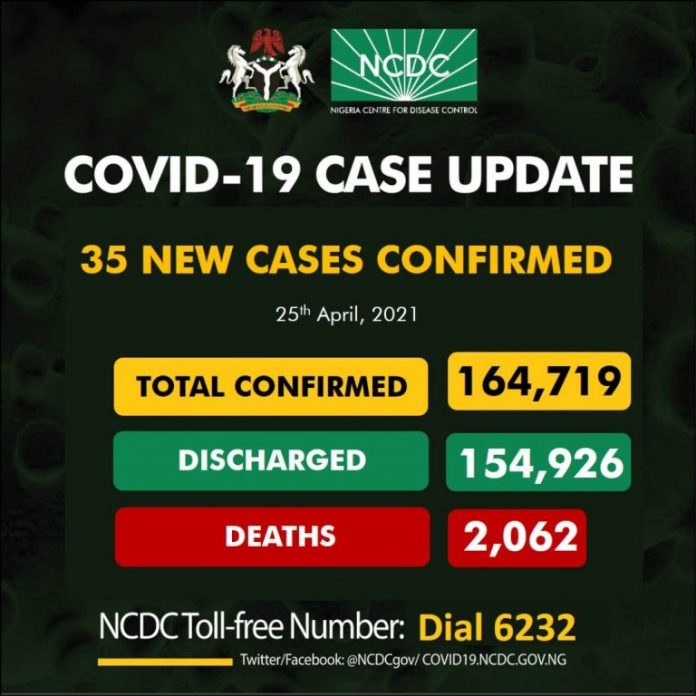 The Nigeria Centre for Disease Control (NCDC) has said the number of COVID-19 deaths in Nigeria declined with one reported after 13 days, raising total fatalities to 2,062.

The NCDC disclosed this on its official Twitter handle on Sunday.

It also registered additional 35 infections in the country on April 25.

According to it, the 35 new cases mark a decrease from 51 logged the previous day.

“The seven-day rolling average of daily COVID-19 cases now stands at about 486, a significant increase from the 440 infections a week ago,” it said.

The agency noted that the 35 new cases were recorded in five states and the Federal Capital Territory (FCT).

The agency said that data from Oyo State were recorded on April 24 and April 25.

It added that 215 community recoveries in Oyo State were managed in line with its guidelines.

The agency disclosed that 239 people who recovered from the virus were discharged on Sunday.

The NCDC noted that over 9,793 infections were still active in the country.

The agency added that a multi-sectoral National Emergency Operations Centre (EOC), activated at Level 3, had continued to coordinate the national response activities in the country.

If you want to die because of ban open grazing, go and die – Wike