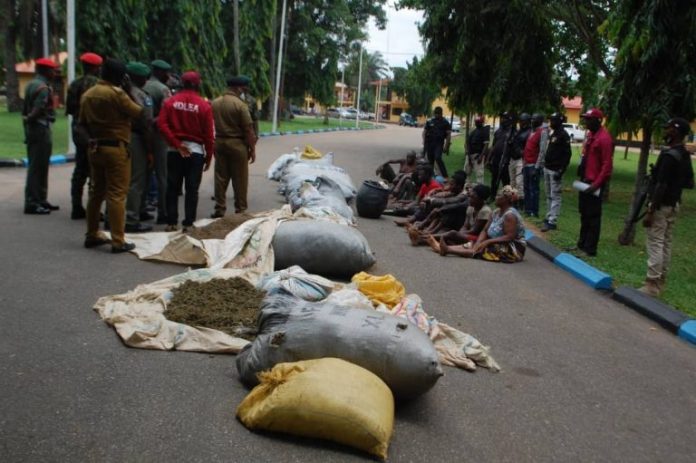 The suspects comprising 10 males and two females were apprehended with about 450 Kilogrammes of substance suspected to be cannabis sativa.

During the handover of the suspects and exhibits to the NDLEA, Maj. Ojo Adenega, Assistant Director, Army Public Relations, 4 Brigade, said that the recoveries made were as a result of clearance operations.

Adenega also said that the Operation left one of the suspects who engaged in gunfire with the brigade personnel dead.

He said that the operation was based on
tips on activities of the criminals in the state, particularly Ilushi in Esan South-West Local Government Area where the suspects and exhibits were arrested.

According to him, the corpse of the suspect and his weapon had been handed to the appropriate authority for action.

Adenega said that on receipt of the information on activities of criminals in the area, the Brigade, led by Brig.-Gen. Musa Sadiq, the Brigade Commander, swung into action.

He further said that in view of the synergy between security agencies in the state, the Brigade was handing over the suspects as well as the exhibits recovered to the NDLEA for further action.

Receiving the suspects and exhibits, Mr Buba Wakawa, state Commander of the NDLEA, appreciated the brigade for the feat.

Wakawa, who was represented by Mr Peter Bisong, Principal Staff Officer, Operations, of the command said that investigation would start immediately and the suspects would be prosecuted.

He disclosed that the quantity of exhibit was about 450 kilogrammes.

The document detailing the arrest of the suspects and the exhibits were later presented to the NDLEA by the Chief of Staff to the Brigade Commander.

Face of 68-year-old Lagosian who allegedly raped her daughter and her...