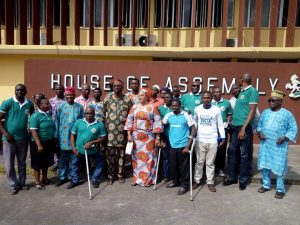 People with Disabilities (PWDs) in Ogun have appealed for special intervention from the state government to mitigate the effects of coronavirus (COVID-19) on them.

They appeal is contained in a communiqué issued at the end of one-day virtual meeting organised for PWDs by Justice, Development and Peace Commission (JDPC).

In the communiqué signed by Fr. John Ngoyi, JDPC Director, stated that people with disabilities were affected by the impacts of COVID-19 and were also left out of the response to it.

It said that many people with disabilities had underlying medical conditions, such as motor neuron disease, cerebral palsy, and multiple sclerosis, which made them more vulnerable to the virus.

According to the communiqués, people with disabilities are not at risk because they are more physically vulnerable, but because governments and authorities have largely forgotten about them.

It called on government to place people with disabilities at the centre of COVID-19 response and recovery efforts and to consult and engage them.

The communiqué also called on government to have data of persons with disability in the state that would help in the delivery of public services to them.

“First and foremost, governments need to involve and fund organisations of persons with disabilities.

“They need to involve them in all steps of the response and importantly, on the recovery process.

It also called on the state government to ensure speedy passage of the Disability Bill and enforce strict compliance of the law.

Death toll rises in attack on mourners, others in Benue