In addition to the relief materials, through NEMA, it also provided five cows to celebrate Sallah with the IDPs in the camp.

The items were distributed at the Model Primary School in Batsari Local Government Area of the state on Sunday, where the IDPs were camped. 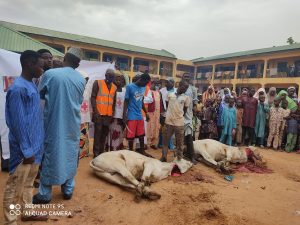 AVM Muhammadu Mohammed (Rtd) Director General, NEMA, while inaugurating the relief distribution , in Katsina, said the food and non food items were meant to provide succour to the people who were displaced due to bandit attacks.

Mohammed, who was represented by Mr Godwin Tepikor, Assistant Director, Relief and Rehabilitation, NEMA, added that the items were sent to enable the displaced persons celebrate the Eid-el-Kabir happily.

“We are here with these items, as part of the federal government’s commitment to providing succour to persons affected by bandit attacks in this camp and also to slaughter these cows so that together, we can celebrate the Eid-el-Kabir with them,” he said.

He however, charged officials that would be in charge of the distribution, to do so with utmost transparency and fairness to all displaced persons.

Mr Kabiru Umar, Camp Manager, Model Primary School IDPs camp, Batsari, commended the federal government and assured that the food items would be judiciously used for the upkeep of the IDPs.

NAN reports that the camp which had no fewer than 3,600 IDPs presently, witnessed the birth of five newborn babies, comprising of four girls and a boy, while the celebration was ongoing.

1 man electrocuted in Kano, the other seriously injured

Condom caused fight between Umoren and me – Suspected killer

We have supported flood victims in 18 states — NIMASA D-G