Students of Olusegun Agagu University of Science and Technology (OAUSTECH), Okitipupa, Ondo State, on Saturday said it there were certain conditions Governor Rotimi Akeredolu should meet before they could endorse him for second term.

According to them, they would resist any attempt to force them to endorse Gov. Oluwarotimi Akeredolu’s second term bid.

The News Agency of Nigeria (NAN) reports that this followed a clash between leaders of the OAUSTECH Students’ Union Government (SUG) and members of Aketi Support Group (ASG) on Friday in Okitipupa over endorsement of Akeredolu.

The students union President of OAUSTECH, Mr Damilola Okunomo, told NAN that members of the ASG had planned to forcefully coopt students of the institution to endorse Akeredolu.

Okunomo alleged that the ASG was trying to do that by using the institution’s gate and logo to take pictures to imply that students of the institution had endorsed Akeredolu.

According to him, the ASG were here to coopt us forcefully to endorse Akeredolu, as they came to our gate and took pictures, which implied that we have endorsed the governor’s second term bid.

“This, however, led to clash, as we resisted such attempt; our tuition fees were hiked from N80,000 to N200,000 and above, no electricity, we lacked security and do not have hostels too.

“Let it be on record that until all our yearnings as students are met, we will continue to resist any attempt to force students of this institution to endorse Akeredolu,” Okunomo said.

He, however, said that himself and some students sustained varying degrees of injuries as a result of the clash.

In a swift reaction, Olanrewaju Akeredolu, Co-ordinator of the group, denied the allegation, saying that there was no clash or any attempt to force the students to endorse the governor.

Akeredolu alleged that some touts wanted to hijack the group’s peaceful tour to drum support for the governor, and this forced our members to immediately leave the area.

According to him, we are working for the second term bid of the governor, and we took our tour to Okitipupa where we shared palliatives like rice, soaps and others to residents, including some students.

“The executives of OAUSTECH led by Okunomo accosted us; we even gave them some palliatives, but later they started asking us questions, which we explained to them,” he said. 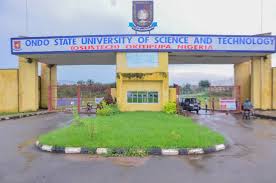