Gay activist, Bisi Alimi, has shared a picture showing he and his husband, Anthony Davis, on bed.

It is a photo that gives a clue to how gays relate while in bed.

Expectedly, the picture has raised a fierce controversy online, with many Nigerians expressing reservations.

Born Ademola Iyandade Ojo Kazeem Alimi, Bisi Alimi is described as a Nigerian gay rights activist, public speaker, blog writer and HIV/LGBT advocate. He gained international attention when he became the first Nigerian to come out on television as a gay man.

His online profiles indicate that he was born in the Mushin district of Lagos to Rasaki Ipadeola Balogun Alimi (a Nigerian police officer) and Idiatu Alake Alimi (a university clerk). He was raised in Lagos, where he attended primary and secondary schools. He was the third in a family of five children from his mother, and sixth from a family of 10 children from his father. He later changed his name to Adebisi Alimi. 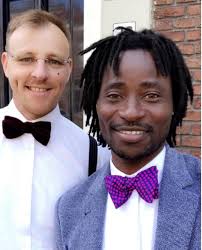 More on him from Wikipedia:

Bisi attended Eko Boys’ High School in Lagos, and graduated in 1993. He led his school cultural dances, both at primary and secondary school, to many awards and honours. He was a member of his secondary school literary and debating society and a Social Prefect (in charge of organising social activities) in his senior year. Also, in 1993, he gained admission into Ogun State Polytechnic, and would later study Creative Arts, majoring in Theatre at University of Lagos. It was during his university education that his sexuality attracted media attention after Campus Lifestyle, the university’s magazine, identified him as a gay man. Prior to the magazine outing, Bisi had experienced much discrimination within the campus, including facing a disciplinary committee on the accusation of his gay status. Although he did graduate, he was almost denied his certificate as it was believed that his morals were unacceptable for an alumnus of the university. 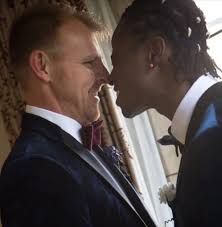 He was admitted at Birkbeck College, University of London in 2011, where he earned his master’s degree in Global Governance and Public Policy.

In 2019, he was offered the John Stopford Scholarship to study Masters in Executive Coaching at Meyler Campbell Coaching School.

Decay in education to blame for nation’s crisis – Afe Babalola