According to a family member, Wale, Ate was said to have slumped on May 27, during which she hit her head against the wall and eventually died.

The incident reportedly occurred in her apartment at Abua Odual Local Government Authority, in Rivers State, where she was serving.

She was said to have died in a hospital on May 30.

“Painfull exit, Atiye Florence Aduke u told me that I should come and visit you once u come back from Port Harcourt to Lagos of which i make move, before getting there, u call me on my way that “Bros Wale” don’t bother yourself ‘I will be fine’ but greet our mother for me till I come back from my journey. Not knowing that u are saying your last word,” Atiye Olawale noted in a tribute to her. 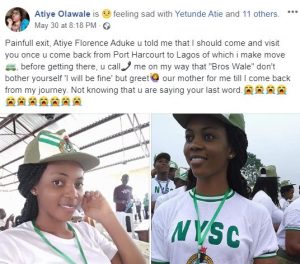