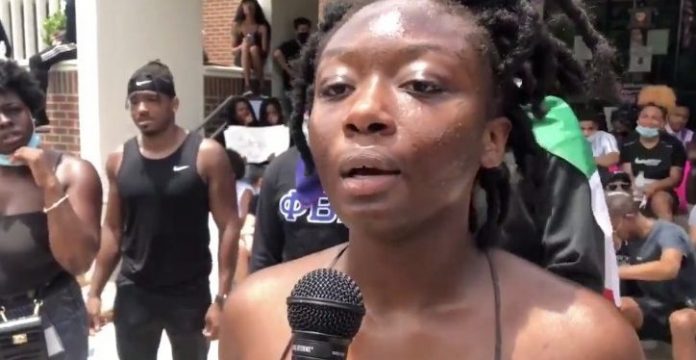 Abike Dabiri-Erewa, the Chairman/CEO, Nigerians in Diaspora Commission, on Monday called on the government of the United States to ensure a thorough investigation into the alleged killing of a Nigerian, Toyin Salau.

The NiDCOM chief described the alleged murder of the 19-year-old Nigerian-American activist in the US as highly depressing and cruel.

This was contained in a statement signed by Abdur-Rahman Balogun, Head of Media and Public Relations Unit of NiDCOM, in Abuja.

Dabiri-Erewa said the US Government must conduct a thorough investigation into the circumstances leading to Salau’s death.

The NiDCOM boss condoled with the immediate family of Salau who died while advocating against oppression and injustice.

NAN reports that Salau, a 19-year-old lady of Nigerian origin, was found dead days after she was declared missing in the city of Tallahassee, Florida, United States.

According to the Tallahassee Police Department, Salau, who spoke at Black Lives Matters protests in the city, was last seen on June 6, near Wahnish Way and Orange Avenue, Tallahassee.

Salau was declared missing hours after she tweeted she was sexually assaulted.

She tweeted that a man molested her that morning around Park Avenue and Richview Road, Tallahassee, Florida.

She said the man offered to give her a ride back to a church where she had sought “refuge” because of “unjust living conditions”.

“He came disguised as a man of God and ended up picking me up from nearby Saxon Street,” she tweeted. “I trusted the Holy Spirit to keep me safe.”

According to reports, the Tallahassee Community Action Agency conducted a search party on June 10 night, starting at Bethel AME Church.

The demonstrators searched for hours.

They carried flashlights and asked for medics to join them in case she was hurt.

Salau on June 15, after a week of her abduction, was found dead.

Before her confirmed death, she was very passionate about government policies, fighting racism and other issues affecting the society.

NASFAT urges victims of sexual assault to speak out

Why it is wrong to say ‘More grease to your elbow’