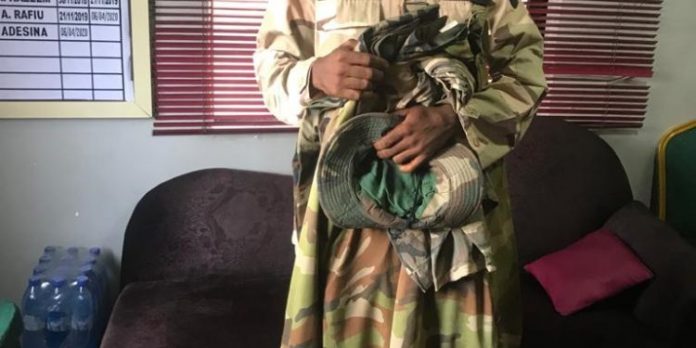 Two Soldiers have been accused of killing a policeman in Lagos over failure to release an impounded motorcycle used for commercial purposes to them.

The spokesman of the Lagos State Police Command, DSP Bala Elkana, disclosed this on Sunday in a statement.

Elkana said one of the soldiers, Kehinde Elijah, 45, abandoned his duty post in the North East where he was deployed as part of the team fighting Boko Haram Terrorists, while the other, Ezeh Frank Joseph, deserted during basic military training.

Available information had it that Elijah and Joseph were arrested in respect of the shooting and killing of Police Sergeant Onalaja Onajide attached to Ilemba Hausa Division.

Unknown gunmen were said to have fired gunshots at the Divisional Police Officer, Ilemba Hausa, Yahaya Muhammed Adesina, and Onajide, the Station Guard.

Elkana said investigation led to the arrest of the two.

He said Elijah was earlier at the Station to solicit the release of his motorcycle, which was impounded by the Police for violating the ban on the use of commercial motorcycles, popularly known as okada.

Not happy with the DPO’s refusal to release the motorcycle to him, he allegedly decided to launch the deadly attack.

He was said to be among three suspects on Police wanted list for violent crimes.

Four pairs of military fatigues were recovered from his house.

He claimed to have deserted the military in 2015 when he was deployed to the North East to fight insurgency.

He has been in Ojo area since then, where Elkana said he has been terrorising members of the public.

Joseph was arrested in his apartment at Imude Pako Area, Era Road, Ajangbadi on May 17, 2020 at about 6am.

For Tottenham, all is well that ends fourth