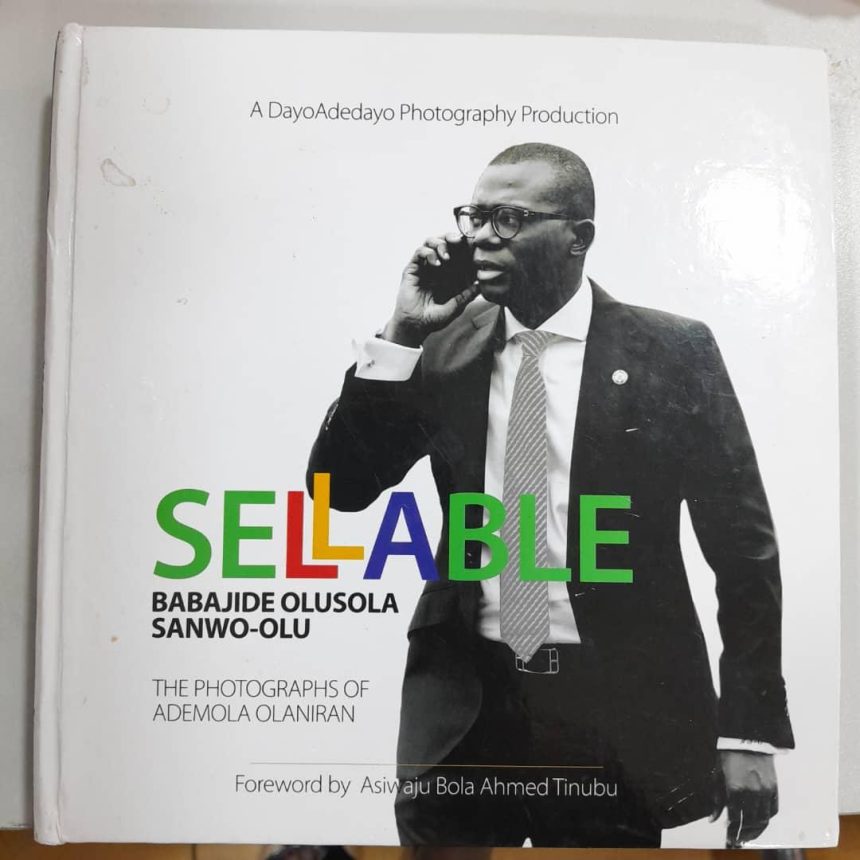 A new pictorial book on the leadership philosophy and humanity of Lagos State Governor, Mr Babajide Sanwo-Olu, has hit the shelf. Produced by acclaimed photographer, Dayo Adedayo, the work titled Sellable presents Sanwo-Olu’s intimate attributes and photographs of many impactful projects his government has undertaken since 29th May 2019. The photos are products of the lenses of another experienced photographer, Ademola Olaniran.

Sellable, which was presented during a recent exhibition of photographs on Sanwo-Olu’s achievements, has its foreword written by a former Lagos State Governor, Asiwaju Bola Tinubu, the presidential candidate of the All Progressives Congress. In the foreword, Tinubu confidently invites the reader to savour the story of a “great made-in-Lagos product”, called Babajide Sanwo-Olu. He recalls that the subject was, first, an Adviser to a former Deputy Governor of the state, Otunba Femi Pedro. Later, he became the Acting Commissioner for Budget and Economic Planning; Commissioner for Commerce and Industry; and later Commissioner for Establishment and Training. And, at all the duty posts, Sanwo-Olu has always demonstrated competence, capacity, energy, character and overall excellence.

Tinubu writes: “Long before he became the Governor of Lagos State, Governor Sanwo-Olu’s cognitive skills, knowledge, experience, professionalism, comportment and sense of propriety had always recommended him for higher responsibilities. It is worth repeating that he has creditably discharged his responsibilities as governor of the most challenging and most prosperous state in Nigeria in the last three years plus.”

In a similar tribute in Sellable, an aide to the Governor, Bukola Odoe, notes that he is “visionary, focused, relentless in his pursuit of excellence – yet caring, generous, with all the attributes of a father figure”.

The very colourful book is as expository as it is creative. It harbours valuable information on the workings of some institutions and a historical phenomenon as we have on the Lagos State Lotteries and Gaming Authority and ‘The Story of Maracana Stadium, Ajegunle’. The stadium used to be an open, undeveloped, crime-infested space where youths of the area, which has produced many stars in sports and entertainment, used to recreate. During his visit to Ajegunle in 2019, Sanwo-Olu had seen the lads as they played in the open jungle. He was touched and, conscious of the need to provide an enabling environment for their talents to flower and rise like their Ajegunle-produced heroes such as Jude Ighalo and Daddy Showkey, he promised to develop an inspiring sporting arena at the venue. Today, the result is the great transformation of the site into a real comprehensive sporting testament called the Maracana Stadium, named after the famous stadium in Rio de Janeiro, Brazil. Sellabe does cool justice to the story of Maracana, which, invariably, is the story of Ajegunle and that of a leader who knows how to get diamond out of the roughest rock.

While the book also provides compelling data on the numerous projects that the Sanwo-Olu government has undertaken – many of them intensive in various ramifications – it equally gives a good picture of the projects being executed under the Public-Private Partnership structure. These include the Fourth Mainland Bridge, which many experts have described as a game changer; the Lagos State Medical Village, to sit on 21 hectares in Ikoyi; the ultra-modern hostel facilities at the Lagos State University; Traffic Management Solution encompassing Artezia Security Systems, the Eko Token – Lagos Cash Token UCSR – Ilubinrin Foreshore Housing Scheme, and Abat Trailer Park Project, which is a 500-truck capacity park at Orile Iganmu, designed to ease traffic in Apapa axis.

The depths, angles and general expertise the photographs exude show that they were taken by professional and experienced hands. They not only attract the eyes; but they also provide a convincing and sometimes astonishing import of the great work the Sanwo-Olu administration has done. The photos are extra significant in the sense that they bring to life many projects that a lot of people might not be aware Sanwo-Olu has delivered. The beauty of the book is crowned by the top-notch production quality that serves the images in 5-D-like bouquets.

The photo collection opens with that of Mr Governor at the removal of the Lekki Roundabout, which reminds one of the pragmatic solutions he has been deploying to traffic management. The government did the same at Allen Junction and this has proved to be a potent antidote to the menace people used to suffer there. Then the pages open to photos capturing achievements in education, such as the Elemoro Junior Secondary School in Ibeju-Lekki and other mega ones in Agbado, Igando, Badagry, among others.