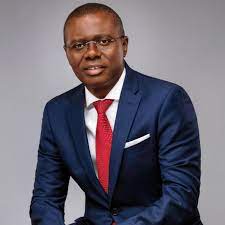 Making Lagos a 21st century economy: Give us this day…

Just as Jean-Baptiste Poquelin, the famous French playwright better known by his stage name, Molière, noted: “It is good food and not fine words that keeps me alive.” As the proactive governor that he is, Mr Babajide Olusola Sanwo-Olu knows that feeding is a crucial item in the bouquet of services to the teeming electorates. It’s an essential democratic dividend.

That explains why he did not hesitate to create a stable and functional template for food security, especially against the backdrop of the unprecedented influx of diverse ethnic groups making the state their abode, oblivious of consequential population increase. For the Sanwo-Olu administration, the scenario has now become a major drive to propel more agricultural input as an effective sustenance for economic growth and development.

The government took a giant leap of faith by unveiling a five-year food security roadmap. This strategy, which is to achieve sustainable and inclusive growth with the citizens at the core, has set Lagos on a right growth pedestal in its quest to invigorate livelihoods as well as boost diversification. According to the Governor, the roadmap focuses on the development of agricultural value chains where the state has competitive and comparative advantages, including the provision and availability of improved inputs, increased productivity and production.

From the inception of his administration in 2019, a comprehensive reengineering of the agriculture value chain has been top on Sanwo-Olu’s agenda. The governor explained that the state government has begun the implementation of various projects in the agricultural space targeted at revolutionising food production with a view to reducing dependency on other states for food supply.

Upon assumption of office, Sanwo-Olu embarked on the prioritisation of agricultural empowerment programme, with the introduction of N1 billion Agric Value Chain Fund targeted at businesses that operate within the sector. About 1,750 actors have been incorporated in the first phase, all empowered with agricultural productive assets and inputs to meet the desired objectives of the government.

Thankfully, some of the programmes are already bearing fruits with over 879 farmers and small and medium scale enterprises working across poultry, aquaculture and rice value chains from the Lagos Agro-Processing, Productivity Enhancement and Livelihood Improvement Support (APPEALS) Project. The second phase had over 600 women and youths, including 240 in aquaculture and 300 in poultry, under the APPEALS project in rice farming.

It also bears stating here that the Sanwo-Olu administration is already playing to literally turn the tables by way of gaining an added advantage for Lagos in the area of rice production. From available information, the completed evaluation of expression of interests for the development of the power plant for Imota Rice Mill will assume the status of a game-changer as the integrated rice mill at Imota is expected to cater for 25 percent of the national rice consumption. What that means is that Lagos would soon begin to play host to prospective rice merchants across the country. This will be the largest rice mill in Africa, suggestive of the fact ‘Lagos is not playing.’

Also, as a way of boosting the aquaculture of the Centre of Excellence, the state government facilitated the Seafood Festival to project the state’s aquaculture and seafood potentials to the local and international markets.

Added to that was the hosting of the maiden edition of the Eko-City Farmers’ Market, which netted N7.9 million transactions, just as the state government organised a mentorship seminar for over 1,000 youths in the state on the theme, Agricpreneur: Strategy for Wealth Creation to facilitate direct supply of fresh produce such as tomatoes, pepper, plantain, vegetables and fruits to the 53 collection centres in the state, with over 1,050 rural women in agricultural related enterprises. These include cultivation of vegetables; cassava planting and cultivation; and garri processing.

Another positive development of the comprehensive food programme of the Sanwo-Olu administration was the commissioning of the Fadama Food Market at Agbalata, Badagry purposely to promote the structuring of agricultural produce marketing.

Now wait for this: in fulfilment of the yearning by Lagosians for Sanwo-Olu to “give us this day our daily bread”, the administration supported the production of about 335,000 loaves of bread under the Eko Coconut Bread initiative. Its success galvanised action towards the hosting of the maiden International Coconut Summit. Its primary purpose: to explore, exhibit and evolve new ideas for sustainable development of the coconut value chain in the state.

As a government continually looking for ways of harnessing its resources, it has also adopted the Public-Private Partnership (PPP) model in delivering food security. One of these partnerships led to the establishment of LACE to produce 50 million fingerlings and process over 2,000MT table size fish yearly, and establish central food security logistics hub at Ketu-Ereyun, Epe and mid-level agro produce hub at Idi-Oro, Mushin. The PPP model is also feasible in the livestock production segment, especially the establishment of the semi-mechanised abattoir in Oko-Oba, Agege axis of Lagos.

All these and more are what have made Sanwo-Olu’s Lagos a destination of choice for many discerning Nigerians who continually throng the city because of its boundless promises.