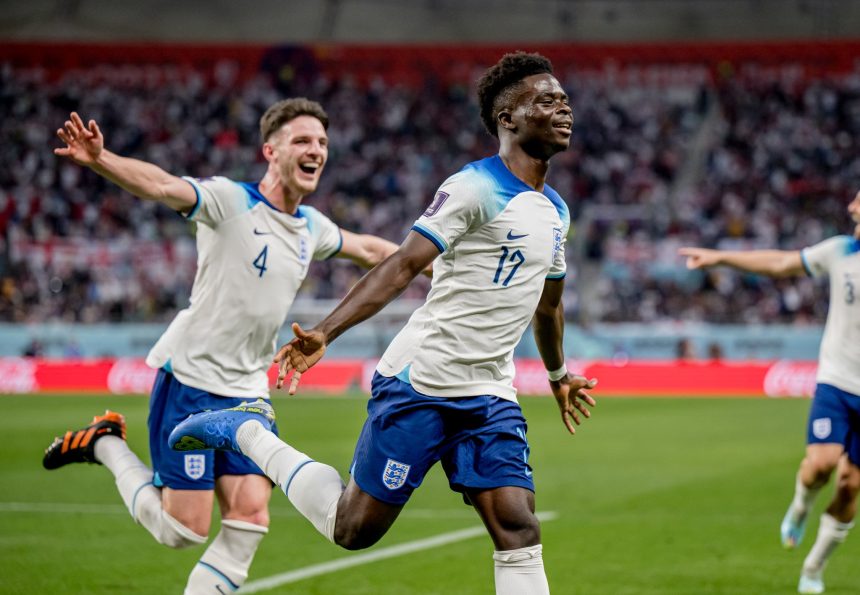 – England kicked off their World Cup campaign in style as they thrashed Iran 6-2 thanks to a brace from Bukayo Saka and efforts from Jude Bellingham, Raheem Sterling, Marcus Rashford and Jack Grealish.

– Bellingham opened the scoring with his first England goal in the 35th minute while Sterling and Saka helped Gareth Southgate’s side establish a comfortable 3-0 lead before half-time.

– Saka produced a brilliant individual effort to take England further out of sight just past the hour mark before Mehdi Taremi netted a consolation for Iran, but substitutes Rashford and Grealish put the gloss on the Three Lions’ Group B debut despite a stoppage-time penalty from Taremi.

– There were problems before kick-off as fans experienced issues with their tickets with the FIFA app down, leading to swathes of empty seats at the Khalifa International Stadium close to kick-off.

– Iran’s players did not sing the national anthem. Many fans back home have accused the squad of siding with the violent state crackdown on popular protests after the death of Mahsa Amini in September following her arrest for wearing a headscarf incorrectly.

– State television in Iran did not show the footage of the players lining up as the anthem played in its live broadcast, according to Reuters.

– Iran suffered an early blow when goalkeeper Alireza Beiranvand collided with teammate Majid Hosseini. Beiranvand initially played on, before being stretchered off in the 19th minute.

– Southgate’s team almost took the lead in the 32nd minute when Harry Maguire rose highest from a Kieran Trippier corner, but his header cannoned off the crossbar. They broke the deadlock shortly afterwards when Bellingham headed home unmarked from Luke Shaw’s lofted cross.

– England pulled clear with two quickfire goals before half-time. Saka produced a fine half-volley from a Maguire knockdown to increase England’s lead in the 43rd minute, before Sterling finished on the volley following a right-footed cross from Harry Kane in stoppage time — the Chelsea forward’s first World Cup goal.

– It became an exercise in damage limitation for Iran after the break, but Saka punished them again in the 62nd minute when he side-stepped past two defenders in the box and curled home a low effort with his left boot.

– Iran found a goal from nowhere three minutes later, however, when Taremi seized on a moment of hesitation from Maguire to ghost in and smash past Jordan Pickford.

– Rashford came on as a substitute and coolly slotted home his first goal at a major tournament in the 71st minute to re-establish England’s four-goal lead. There was still time for Grealish to score late on as he turned home following unselfish work from fellow substitute Callum Wilson.

– Sardar Azmoun almost added another consolation for Iran when he raced through in stoppage time, but Pickford produced a fingertip save to turn his effort onto the bar. Iran were awarded a late penalty after a VAR check for a foul on Morteza Pouraliganji, however, and Taremi slotted home to restore some pride for Iran.

A superb start to our @FIFAWorldCup campaign. 👏 pic.twitter.com/oUSGfsQFm0