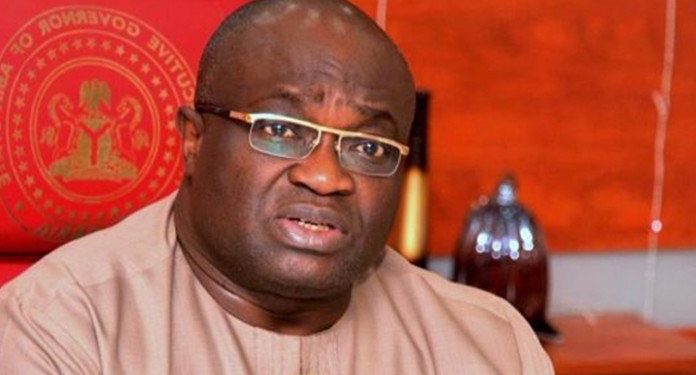 The Peoples Democratic Party (PDP) in Abia State on Thursday flagged off its campaign for the 2023 general elections, reiterating commitment to good governance.
The G-5 Governors, Nyesom Wike of Rivers, Ifeanyi Ugwuanyi of Enugu, Seyi Makinde of Oyo State and Samuel Ortom of Benue were among other dignitaries present at the event.

The national leadership of the party, including its presidential candidate, Atiku Abubakar, was however conspicuously absent, underscoring the fact that the PDP is still factionalised.

Speaking at the flag off in Umuahia, Gov. Okezie Ikpeazu of Abia urged the people of the state to vote PDP to ensure continuity in infrastructural development and good governance.
He expressed confidence that party candidates would emerge victorious in the elections because they were men of character and also the achievements of the state government under his watch.
The governor said : ”We are sure and confident that all our candidates in PDP will win their elections clearly and squarely.

ALSO READ: Atiku is wrong theory – Tinubu
“In the past seven years, we have laid a solid foundation for the take off of a great Abia.
“For the first time, we are going to bequeath a 30-year plan, a master plan for Aba, Umuahia and Ohafia, as well as an industrial plan to the incoming administration.
“We are bequeathing roads that will last for at least 30 years and have a list of things that we have done in all facets of human endeavour which the incoming administration will build on”.

In an address, Gov. Samuel Ortom of Benue, urged the people of Abia to remain resolute in supporting the party and ensuring that PDP succeeded in the 2023 general elections.
Ortom said that the party was ready to take Nigeria out of its present challenges.
”We are committed to equity, justice and fairness and we are committed to winning the election.
“Our people are suffering insecurity, economic problems and social unrest, and we are ready to support and ensure that we take Nigeria out of the woods,” he said.

Earlier, the state PDP Chairman, Chief Asiforo Okere, said that the event was a culmination of the rallies and sensitisation campaigns that took place in the 184 wards.
Okere said that the party would be presenting 36 candidates in the 2023 general elections and to further stamp its giant strides in the enthronement of good governance in the state.

He thanked all the party members for their support, especially those that remained in PDP after failing to secure tickets during its primary election, adding that such person were “the heroes of the event”.
Responding on behalf of other candidates, Prof. Eleazar Ikonne, the PDP governorship candidate for Abia, said that he would run a participatory government if elected.

Ikonne said that his manifesto covered areas such as trade, industrialisation, good governance education and rural development and would be used in transforming the state.
He appealed to the people to give him the mandate of leading the state and expect best results as well as more developmental projects.