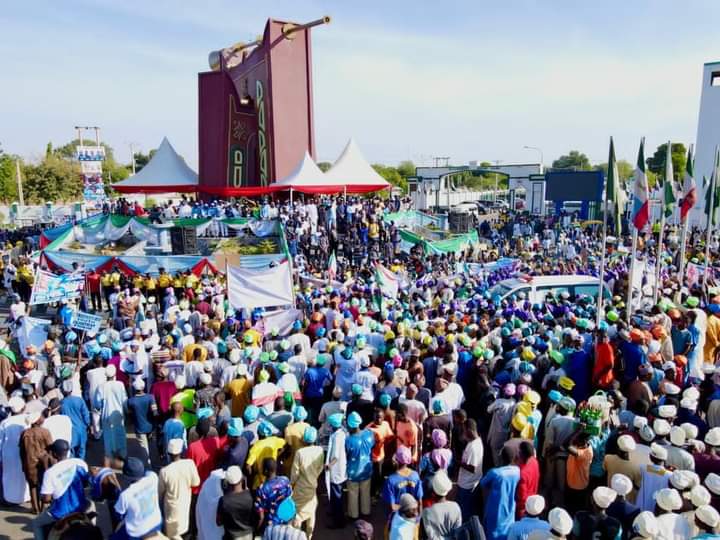 About 2,000 All Progressives Congress (APC) Support Groups in Kano on Sunday, staged a 1 million Permanent Voter Cards (PVCs) Walk for Asiwaju Bola Tinubu, to mobilise support for him for 2023 presidential election.
Addressing the groups, Gov. Abdullahi Ganduje urged them to ensure massive mobilisation for APC to ensure its victory at all levels in 2023 general election.

Ganduje said Kano State would always remain an APC State because the people at the grassroots have benefitted much from the dividends of democracy provided by his administration.
He said that the 1 million PVC match has turnout an over three million match because of the mass support base of the party in the state.
The governor said the party was happy with the massive youths turnout at the event, saying it was a sign of victory in the 2023 poll.

“The success of the rally is a clear statement and demonstration of the preference of our teeming youths as regards the choices before them.
“It also underscores a clear understanding of the manifesto of our presidential candidate.
“The support for Gawun/Garo is a vote of confidence for our governorship candidate and his deputy,” he said.
Nasiru Gawuna, Kano deputy governor and APC governorship candidate, urged the party supporters to remain focused on their quest for victory in the 2023 poll.

He said that Tinubu has the character, capacity and competence to provide leadership that would take Nigeria to the promised land.
The News Agency of Nigeria (NAN) reports that the one million PVC walk was organised by APC support groups, led by Director, Northwest Support Group for Tinubu Campaign Council , Bappa Danagundi.
The walk which began in the morning at the Kano Emir’s palace took the participants through State Road to Government House Roundabout terminating at Racecourse in the Government Reserve Area