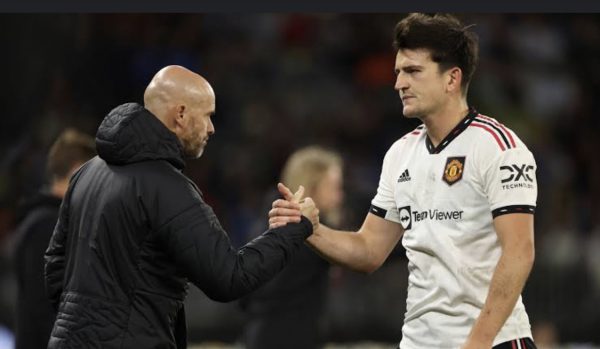 – Maguire has been jeered by his some of his own fans on club and country duty this season and made mistakes in the build-up to two Germany goals in England’s 3-3 draw on Monday.

– “I back him because I believe in him,” said Ten Hag.

– “It’s about him. I’m sure he can do it. He’ll turn this around. I am really convinced of that.”

– Ten Hag has preferred Lisandro Martinez and Raphael Varane as his central defensive partnership, with playmaker Bruno Fernandes wearing the captain’s armband ahead of Maguire in recent weeks.

– Maguire has made only three Premier League appearances this season.

– “Even after he wasn’t in the team, he trained really well,” said Ten Hag of the 29-year-old.

– “But more important, the quality was there. You see his career, almost 50 caps for England. He’s performed really well for Leicester and Manchester United. What you see is he has a high potential.”

Ten Hag: "He [Maguire] is doing quite well, but there is always room for improvement. If he believes in his own skills he will be back, and I am convinced of that. His abilities are really high."

– Luke Shaw, a team-mate for both Manchester United and England, said earlier this week that Maguire has been criticised “more than I’ve ever seen before in football”.

– However, striker Marcus Rashford, who picked up a muscle injury in United’s 3-1 league win over Arsenal on 2 September, is back in training along with Anthony Martial, who is returning from an Achilles tendon problem which has restricted him to one substitute appearance so far.

– United head into the match on the back of four successive league wins and Ten Hag says he is relishing his first taste of the derby.

– “It excites me,” he said. “We want to be involved in these games because there is such a good vibe, it gives so much energy. We will do everything to win the game.”

Ten Hag on the Manchester derby: "I approach this by looking at ourselves. #mufc, we want to win every game. The aim for Sunday is nothing else. We have to do our best and of course a good plan, and the execution."

– Ten Hag was part of City manager Pep Guardiola’s backroom staff during the Spaniard’s time in charge of Bayern Munich. Guardiola suggested in April, before the Dutchman joined United from Ajax, that Ten Hag could succeed him at the club.

– “It’s a nice compliment,” said Ten Hag. “But I’m 100% convinced I choose Manchester United with everything in it and I didn’t regret it for one second.”

🚨 Ten Hag asked about Guardiola's suggestion last season that he would have been a good fit at Man City: "It's a nice compliment but I'm 100 percent convinced. I chose Man United with everything in it and I didn't regret it for one second." [@RobDawsonESPN] #MUFC 🇳🇱🔴

🔊 Erik: "We want to win every game, so the aim for Sunday is nothing else.

"We have to perform at our best through our rules and principles. It's about executing the game plan to get a result." 💪#MUFC || #MCIMUN