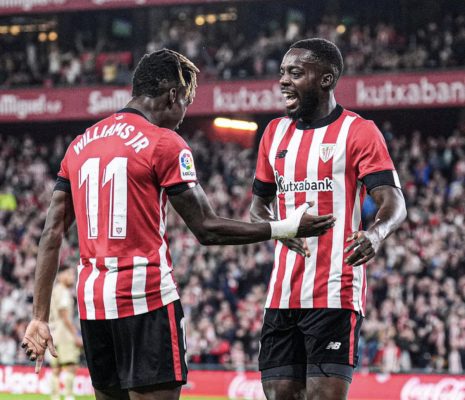 – After partying ways to different national teams in the just ended international break, the Inaki brothers combine once again to power Athletic Bilbao to a sensational return into the Spanish Laliga.

– The Rojiblancos humbled newbies, UD Almeria by 4-0 at tbe Estadio San Mames Barria in match-week 7 of the new campaign.

– Inaki Williams opened the scoring account in just ten minutes from kickoff after heading into the net from the cross of his younger brother, Nico Williams.

– Oihan Sancet Tirapu doubled up the lead on the 17th minute, younger brother Nico Williams added to the riots on the 60th minute before substitute Mikel Vesga sealed the win with a last minute spot-kick.

– Having lasted the entire duration of the game, the 28 year old scored again on the 50th minute but was ruled out by the Video Assistant Replay (VAR).

– Inaki finally made his debut for Ghana in their defeat to Brazil last week after climbing off the bench and subsequently enjoyed a full time action in their narrow win over Nicaragua.