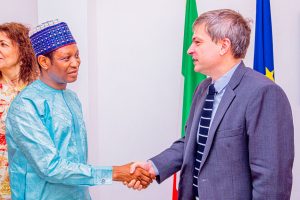 The NCPC boss made this known when he paid a courtesy visit to the Consul General of Italy, Mr Ugo Boni at the Italian Consulate, Victoria Island, Lagos on Friday.
A statement by Mr Celestine Toruka, Head Media and Public Relations, said the meeting became necessary
as preparations for the commencement of the 2022 Christian Pilgrimage to Rome and Israel reached an advanced stage.
The NCPC helmsman stated that he was at the Italian Consulate to synergise with him and explain the operational framework of the Commission, considering that he had just assumed duty in Nigeria.

He further explained that NCPC was the only apex Christian faith-based agency with direct link with the Presidency.
He expatiated that the Commission was established in 2007 by an Act of the Parliament to coordinate and superintend the activities of christians performing pilgrimages to the holy sites around the world.
Pam told the envoy that currently the Commission’s pilgrimage destinations included Israel, Jordan, Rome and Greece.

He further hinted that the Commission had plans to explore more holy sites in Turkey and other countries so that Nigerian Christians would have the opportunity to visit as many sites as possible and be spiritually fulfilled.
The NCPC Chief Executive further informed Mr Boni that the Commission would soon commence its 2022 Pilgrimage to Rome and Israel by the middle of October.
The NCPC boss solicited his cooperation and assistance in facilitating visa procurement for the intending pilgrims and officials.