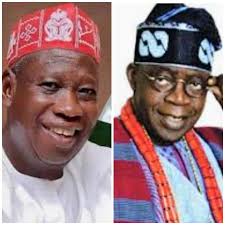 Governor Abdullahi Ganduje of Kano Statemay have laid to rest speculations about whether or not the All Progressives Congress presidential candidate, Asiwaju Bola Tinubu, will go for a Muslim running mate.

Although religious balance is a usual denomination in the circumstance in Nigeria, electioneering exigencies seem to be forcing Tinubu to think otherwise.

The mass north will prefer a Northern Muslim to be in the vice presidential post once he is not the President.

A Tinubu too will not want to joke with the subtle condition based on the volume of voters in the zone.

Now, Ganduje says the Muslim-Muslim ticket is no more a matter of doubt.

Speaking during a meeting with about 100 clerics at the Kano State Government House as part of activities to mark Eid-El Kabir, he said, “We have advised him [Tinubu] to pick a Muslim deputy, and he has agreed.

“A Muslim-Muslim ticket is a reality. It’s not something new in Nigeria.”

Ganduje also asked the clerics to pray for Tinubu to emerge as Nigeria’s next president in 2023.

What is thus not sure now is who Tinubu has picked.

Interestingly, Ganduje is a possible option as he and Tinubu started the project together.

Yet, also on the list are Governors Nasir el-Rufai and Babagana of Kaduna and Borno State, as well as Tinubu’s vocal and strong promoter, Ibrahim Shettima.