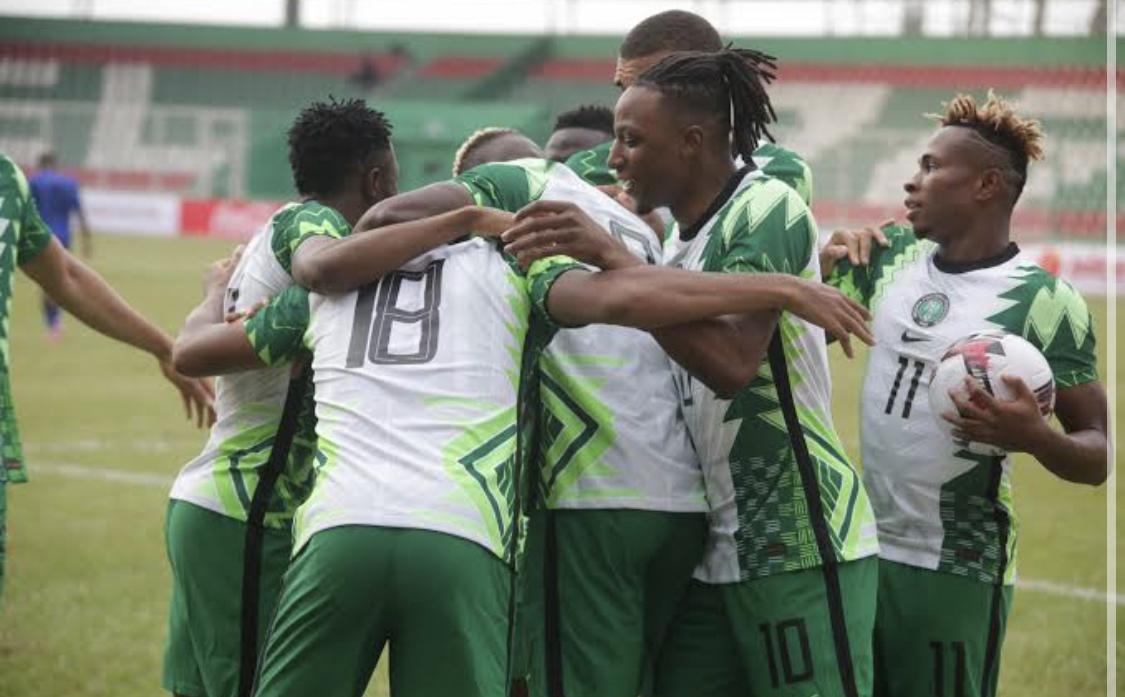 – Nigeria got their 2023 Africa Cup of Nations qualifying campaign off to a winning start, as they defeated Group A rivals Sierra Leone 2-1 at the Moshood Abiola National Stadium in Abuja on Thursday evening.

– The Super Eagles had to come from behind to claim the victory, with Alex Iwobi and Victor Osimhen striking in the wake of Jonathan Morsay’s early opener for the Leone Stars.

– The result sees Nigeria join Guinea-Bissau (who comfortably defeated Sao Tome & Principe in a concurrent match) at the top of Group A on three points.

– A choppy playing surface offered challenges for both teams, though Sierra Leone seemed to adapt more quickly, as attacker Mohamed Buya Turay had the first shot in anger in the third minute, with his effort tipped over the crossbar by Nigerian goalkeeper Francis Uzoho.

– The Super Eagles then had a couple of chances through Victor Osimhen, and it seemed they would soon seize control of the match, but they were stunned when the Leone Stars claimed the lead in the 11th minute.

– Musa Kamara whipped in a fine cross from the left flank to pick out the run of Jonathan Morsay, who threw himself at the ball and scored with a diving header to put the visitors 1-0 up.

– It was almost 2-0 just a few minutes later, as Sierra Leone cut through Nigeria’s defence on a counter attack and Musa Kamara struck a low shot which was tipped onto the post by Uzoho.

– Nigeria then went straight up the other end and equalised to make it 1-1 on 16 minutes: Moses Simon played a well-weighted pass to put Alex Iwobi into space on the edge of the box and the former Arsenal man opened up his body and whipped a shot into the bottom corner of the net.

– The teams went on to trade half-chances before Nigeria claimed the lead for the first time in the 41st minute: Ola Aina’s cross from the right picked out Simon, who registered a second assist with a downward header across the six-yard box which was stabbed home by Osimhen to make it 2-1.

– The Super Eagles may have enjoyed the lead at halftime, but the start of the second half saw them opt for a tactical change, as forward Sadiq Umar made way for central midfielder Peter Etebo.

– The home side blew a great chance to add to their advantage when Samuel Chukwueze shot wide from a glaring opportunity in the 54th minute, and shortly thereafter Sierra Leone almost levelled the game when substitute Amadou Bakayoko beat Uzoho to a ball into the box, but sent the ball wide of the target.

– Nigeria had half chances to kill off the game in the final quarter, but of more note were injuries suffered by captain William Troost-Ekong (groin) and striker Osimhen (hamstring), who were replaced by Kenneth Omeruo and Terem Moffi in the dying minutes.

– The teams will return to Group A action on Monday 13 June, with Nigeria away to Sao Tome & Principe, while Sierra Leone will host Guinea-Bissau.