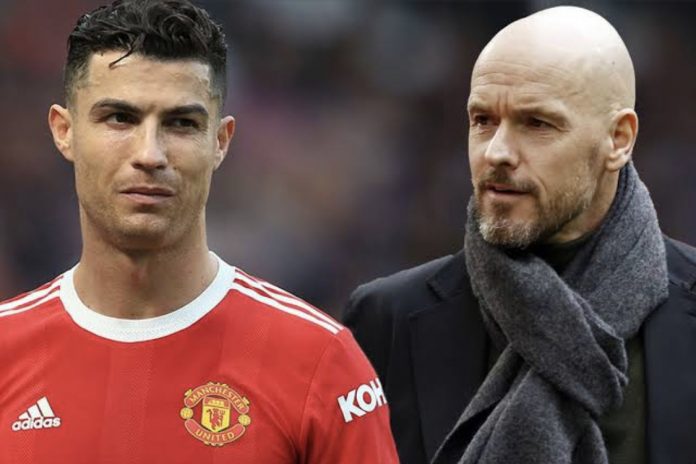 – Cristiano Ronaldo has said that new Manchester United manager Erik ten Hag will need time to turn around the club’s fortunes, making clear that “things need to change the way he wants.”

– In his first comments about the current Ajax coach since he was officially appointed by United last month on a three-year contract to begin this summer, Ronaldo suggested he was excited for the future at Old Trafford.

– “What I know about him is he did a fantastic job for Ajax, that he’s an experienced coach,” Ronaldo told ManUtd.com. “But we need to give him time.

– “Things need to change the way he wants.

– “We are happy and excited, not only as players, but the supporters as well.

– “I wish him the best and let’s believe that, next year, we are going to win trophies.”

– Ronaldo has another year to run on his contract after returning to United from Juventus last summer, but there has been plenty of speculation over whether the 37-year-old will fit into Ten Hag’s plans.

– Speaking last week, interim manager Ralf Rangnick, who will take up a two-year consultancy role at Old Trafford from this summer, insisted that Man United needed to strengthen their forward options.

– “Cristiano isn’t a central striker or does not want to play in that position,” Rangnick said. “It’s obvious the club needs at least two new strikers who give this team more quality and more options. I wouldn’t even call it wingers.”

– Despite a desperately disappointing season for Man United that will see them miss out on Champions League qualification for next season, Ronaldo has scored a team-high 24 goals in all competitions. His 18 Premier League goals are almost a third of the team’s total.

Sound engineer’s death: ‘Lagos has no room for savagery’

The Kainji Dam Ahmadu Bello built in 1964 with a loan is still standing, nothing to show for recent borrowings – Obi

Sound engineer’s death: ‘Lagos has no room for savagery’

CAN mourns death of 3 top members