– Following the successful release of the first single off Burna Boy’s ‘Love Damini’ album an official release date as well as the number of tracks to expect on the album has been revealed.

– The Grammy award-winning singer Burna Boy has revealed the number of tracks to expect off his forthcoming sixth studio album as well as its official release date following the successful release of the first single off the project titled ‘Last Last.’

– ‘Love Damini would be the 7th studio album from the gifted singer who has been taking afrobeats to the next level. 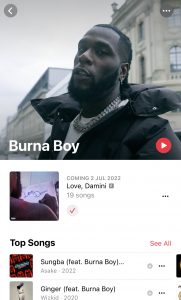 – In other news, Burna Boy has lashed out a blogger who compared his song to the work of other African artists.

– He claims to have opened doors in Afrobeats that no other musician has ever been able to open.

– His reply came after an Instagram blogger by the username @TheMixNaija posted a screenshot showing Davido’s latest release, “Stand Strong” topping the Apple Music chart whilst Kizz Daniel’s “Buga” and Burna Boy’s “Last last” were in No 2 and 3 respectively.

– Burna who took to the DM of the blogger to lash out at him for comparing his song.

– “Paid blog!!! Stop comparing my song to any Africa artist song!! I have been opening doors for afrobeat that could have never be opened!”.”