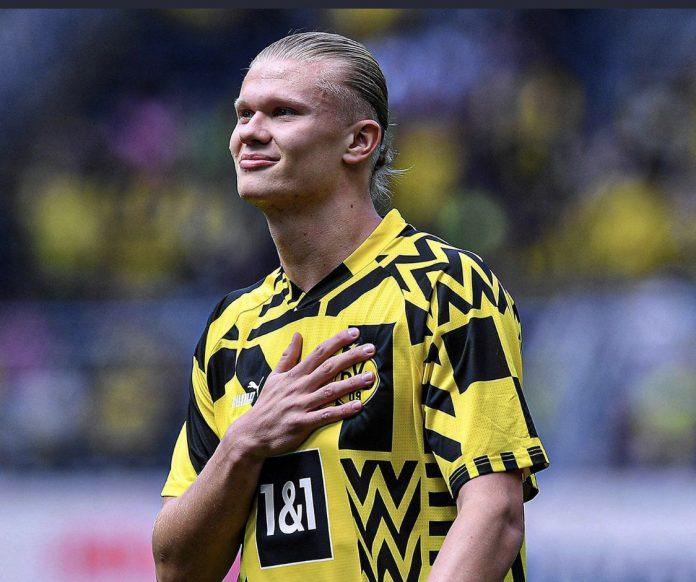 – Striker Erling Haaland scored and was given an emotional goodbye in his final match for Borussia Dortmund.

– Haaland, who is set to join Manchester City this summer, scored a penalty in Dortmund’s 2-1 win over Hertha Berlin.

– Before the game, Dortmund’s last match of the season, there was a ceremony to mark the Norwegian’s departure with the Dortmund fans chanting his name.

– He will leave having scored 86 goals in 89 games since joining from Red Bull Salzburg in January 2020.

– “It has been nothing but an honour to wear this shirt,” Haaland tweeted afterwards.

– “At [Dortmund] I’ve spent memorable moments, met special people, not to mention a fan base that has been always our extra man on the pitch.

It has been nothing but an honour to wear this shirt. At @BVB, I've spent memorable moments, met special people, not to mention a fanbase that has been always our extra man on the pitch. The Yellow Wall is truly incredible. I'll never forget any of this! Thank you all! 🖤💛 pic.twitter.com/MegplT4y7B

– Haaland, who passed his City medical in Belgium on Monday, will move to Manchester in July after the Premier League leaders activated a 60m euro (£51.2m) release clause in his contract.

– His penalty equalised after Ishak Belfodil’s spot-kick put Hertha ahead before 17-year-old Youssoufa Moukoko struck with a winner in the 84th minute.

We are humans. Bring back our husbands – Wives of Lagos...