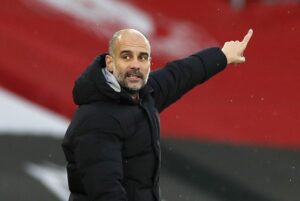 – Pep Guardiola said “everyone in the country supports Liverpool” after Manchester City moved three points clear at the top of the Premier League.

– City’s 5-0 win over Newcastle on Sunday came the day after Liverpool dropped points in a 1-1 draw with Tottenham.

– In contrast, Guardiola’s side lost in the Champions League semi-finals in midweek as the Reds reached the final.

– “Everyone in this country supports Liverpool, the media and everyone,” Guardiola told beIN Sports.

– “Of course because Liverpool has an incredible history in European competition. Not in the Premier League, because they have won one in 30 years, but it is not a problem at all.”

– Guardiola’s side are looking to win a fourth Premier League title in five years, with Jurgen Klopp’s Liverpool taking the crown in 2019-20, and visit Wolves on Wednesday, before a trip to West Ham and a home game to finish against Aston Villa.

– “Liverpool are alongside [Manchester] United as the most important team in terms of titles, legacy, history, dramas for many, many things,” said Guardiola.

– “But we have since the last 11 or 12 years been there. I know sometimes we are uncomfortable, but I don’t care if the people want Liverpool to win more than us. It is not an issue.”

– He added: “We have to do nine points or maybe six, it depends what is going to happen in the next two games in terms of goal difference, but now Wednesday is the real, real, real final for us. Our destiny is in our hands and this is important,”