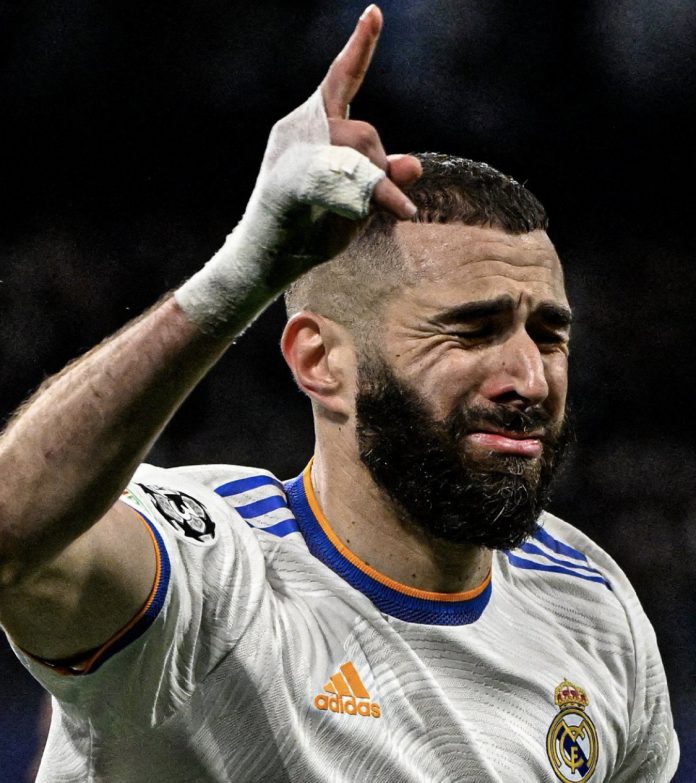 – Benzema, 34, netted a first-half header from Vinicius’ pass to match Raul’s 323 goals, with only Cristiano Ronaldo (450) scoring more for the club.

– Ferland Mendy put the Spanish champions ahead, with Rodrygo and Vinicius adding the third and fourth.

– Vinicius then scored twice more in the second half to seal the rout.

– Carlo Ancelotti’s Real, who face Liverpool in the Champions League final in Paris on Saturday, 28 May, clinched their 35th Spanish title at the end of April with four games to spare and ran riot against bottom-of-the-table Levante.

– Left-back Mendy scored after only 13 minutes, bursting into the box and shooting past goalkeeper Dani Cardenas before Benzema doubled the lead six minutes later.

– Rodrygo and Vinicius made it 4-0 by half time, both scoring after good work from Luka Modric, who became the first Real player since James Rodriguez in 2015 to contribute three assists in a La Liga match.

– Levante needed to win at the Bernabeu and then again in both their last two matches to have any chance of avoiding relegation, but conceded a fifth in the 68th minute.

– It was unselfish from Benzema as he collected another brilliant pass from Modric, went around Cardenas and pulled the ball back for Vinicius to get his second and Real’s fifth.

– Benzema and Modric, both superb throughout, received a rapturous reception when they were substituted with one of the men to have come on, Luka Jovic, setting up Vinicius as the 21-year-old Brazil winger completed his first Real hat-trick.

– “The coach asked me if I wanted to stay on, and I did for the chance to get a hat-trick,” said Vinicius.

– “It’s my first hat-trick and the team-mates have helped me so much and I’m just very, very happy.”

– On Benzema, Vinicius added: “I didn’t know he had equalled Raul’s [goals total], he scores so many goals for us and does so many other things for the team.”

– Real play at Cadiz on Sunday and end their La Liga campaign at home to Real Betis on 22 May before they aim to become European champions for a 14th time against Jurgen Klopp’s Liverpool.

– “We have to think about the final and we have to be prepared for it,” added Vinicius. “The last match of the season will be the best one.”

There are no chalks in our schools – Cross River teachers