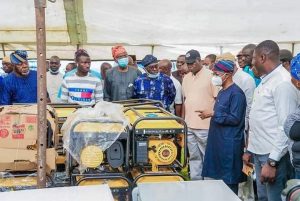 Gov. Oyetola with some of his cabinet members inspecting the stolen items returned by hoodlums
SHARE

Dikio made the call in a statement by his Media Adviser, Mr Nneotabase Egbe, and made available to newsmen in Yenagoa.

Dikio unveiled the first set of ferries owned by Abitto Global Services Limited, an indigenous firm owned by an ex-agitator, Mr Richard Akinaka, at the weekend, in Calabar at the weekend.

He said if stakeholders looked inwards and tapped the unique natural endowments in Niger Delta, the region would produce new wealthy entrepreneurs.

Dikio expressed regrets that people often focused on the risk factors, and discouraged themselves from starting and in the process, allowed lofty ideas to die.

“One of the first instructions God gave is ‘go and multiply, dominate’.”

“Are you dominating this riverine environment? Why will you be thinking about other parts when the one God gave you, you have not dominated it? How many roads can you build?

“Our people live in creeks unconnected by road but God has given us roads, the rivers are our roads and for those who don’t know, many great powers are maritime powers.

“The waterways can carry any load, any load at all, it can carry it. The waterways of the Niger Delta are full of money but people don’t know. Stop making excuses and just take the initiative,” he said.

Dikio said people lived in snow regions all year and had adapted to that environment, adding that Niger Delta people should adapt and dominate the water environment.

He congratulated Akinaka for the bold step in floating the ferry business and urged him to expand to other riverine parts of the country.

Dikio said he should go public by allowing people to buy shares and be part of the business.

He said people of the region should pull their resources together, form partnerships and cooperatives to pursue and actualise their business dreams.

Dikio said that the transport company should not remain only in the Niger Delta, adding that Lagos was 75 per cent water.

“I will do everything within my power, to promote this initiative. Already, I have started. I urge you to go public, so that you can spread generational wealth,” he said.

Earlier, Akinaka said he floated the transport business out of the need to find solutions to problems, as he understood the basic challenges of the people.

“That is why you see me, my activities in government are just a part-time job. That is why we call ourselves stakeholders.

“We are stakeholders, we assist, and we interface between the government and our brothers,” he said.

Akinaka said business was all about solving problems.

“Looking at the distance, when you travel from Uyo to Calabar, the bad road and terrible traffic, I began to think how to ease the sufferings of the people.

“I travel that road every week and I know how it is. So, while trying to build military boats, I decided to design a fery and that is what we are seeing here today.

“We did this design, we have four concepts of what we have designed and the military version,” he said.

Akinaka said they had supplied about 18 pieces of the ferries to NNS Pathfinder through the government of Rivers State.

According to him, this is the first one, this is a 26 carrier, that’s why you see the name AWLP26, we have a 20 carrier too which is ready.
ALSO READ:Easter: Kukah lauds Buhari for granting amnesty to jailed Nigerians
Akinaka said the company was meeting the gap in marine transportation.

He said their operation would start from here, adding that they would operate from here straight to Ibom Golf Resort in Akwa Ibom and other areas.