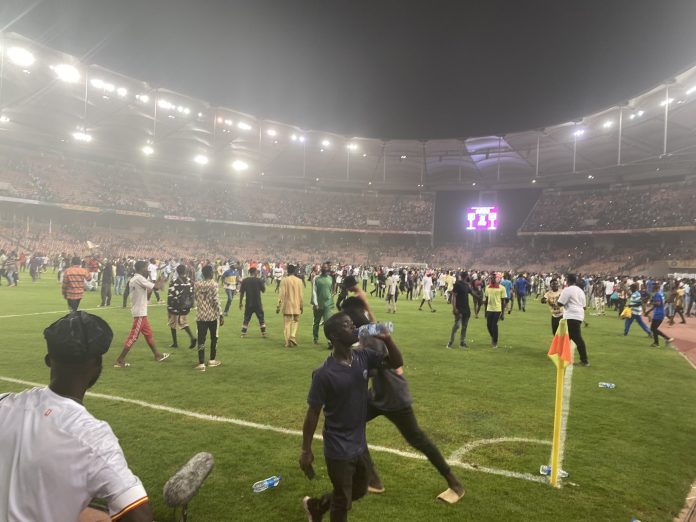 Last Tuesday’s debacle at the Moshood Abiola National Stadium in Abuja, where the Super Eagles of Nigeria hosted the Black Stars of Ghana in the second leg game of their 2022 FIFA World Cup playoff fixture, has since left Nigerians with many talking points.

The Super Eagles failed to win the game, and all the sore points regarding the faulty preparations for the match and how it disappointingly went immediately manifested in the depressing moments which followed.

Since then, the Federal Government has inaugurated an investigative committee to unravel the circumstances which led to the vandalisation of a stadium that was recently magnanimously rehabilitated for Nigerians by industrialist Aliko Dangote.

The committee is to also recommend measures to forestall a recurrence of such ugly incident.

But the incident has always been a disaster waiting to happen, and now it has taken just another football match of 90 minutes to highlight that fact we have always ignored.

It is a fact that we have always gotten away with blue murder whenever we organised big sports events at several venues in this country, and most especially in Abuja.

Not for a few times only have we witnessed poor organisation of matches and the destruction of facilities at this same stadium, only for us to have waved such away as just minor incidents.

Perhaps, it was our non-qualification for Qatar 2022, or the fact that we will need several millions of Naira to put the stadium back into good shape, or the realisation that the eyes of the whole world are now on us on this matter.

But the usual practice has always been that thousands of security personnel were always deployed to ensure orderliness and security.

And when a senior government functionary was being expected at the event, the number of security personnel could double the number earlier planned.

Along the line, the number gets tripled because many other security personnel usually found their way into the stadium, with many of them coming along with family and friends.

Now, what comes with this is that orders would be met with counter-orders, security would be compromised and a state of disorder would set in.

Also, there were several other Nigerians who found their way into the stadium without tickets, either coming in with government officials as security details or family members, or with organising officials as friends or “customers”.

These were people that would not be accounted for, based on the fact that they were not ticket-holders, and the result is that the stadium was now taking in more than its 60,000-plus capacity.

It was clear from the beginning that the match was going to attract many spectators, especially as the stadium was just hosting its first high-profile match in close to about a decade.

With the fact that the Super Eagles were playing against arch-rivals Black Stars, and in an important game as a World Cup qualifier, all checks regarding crowd control should have been put in place.

With all these ticket-holders and those without tickets, we were already having over 70,000 people for a stadium with the capacity of about 60,000.

Now, they were to be directed and controlled by security personnel who were at the stadium without being trained on how to control crowd.

But was it supposed to be their job, to control crowd and direct spectators to their seats?

Even when the tickets have not been numbered in a way to direct the holders to their appropriate seats?

In other words, we simply forgot the role or position of those called stewards, who have been trained to control crowd, direct ticket-holders to their seats and observe crowd behaviour.

But more appalling was the fact that sections of the stands were closed to spectators after they had purchased tickets that would give them seats in those sections.

For example, tickets to the VIP sections went for N25,000 and N10,000, depending on which side of it, but those sections were closed either by the stadium authorities or the security personnel.

The explanation was that President Muhammadu Buhari was being expected, and his security details closed down the whole of the VIP sections.

It then meant those with tickets into these closed sections needed to find seats elsewhere to use, and they found no other place than the sections closest to the VIP sections.

The walkways were then all taken up, the Media Tribune was taken over and accredited sports journalists found no space to work from and the terraces were now overflowing and bulging with spectators.

To make matters worse, the communications networks were jammed and no form of communication could have taken place between stadium officials to effect some quick changes.

There was also the problem of not opening the stadium gates to spectators early enough, even when the spectators had thronged the venue as early as 8 a.m.

That was because the FCT officials involved in cleaning the stadium were still cutting trees and trimming flowers as late as 11 a.m, a job that should have been completed a day earlier.

The result was that there was a rush between 3 p.m and 6 p.m by the spectators to get in and find for themselves seats that were no longer available, since they had been taken up by many of those without tickets.

By 6 p.m, the stadium was overfilled, even as several other spectators were still finding their way in, and it was evident that a stampede could happen.

But there were no trained personnel to observe this and do something about it, and as for those around and who were saddled with that responsibility they were either helpless or engrossed with watching the match.

In the end, the spectators who were left frustrated, denied their rights, almost suffocated and perplexed with the match result could only spill onto the stadium pitch to wreak havoc.

But, in all these, the blame must go to not only the spectators or the security personnel, but the Federal Ministry of Youth and Sports Development and the Nigeria Football Federation (NFF).

The ministry owns the facility, which has no stewards or trained crowd control personnel of its own, and it even superintended the organisation of the match through a committee it set up.

The NFF on its part failed to take charge of its responsibility as the match host, and as the home federation that is not only in charge of the security of both teams playing but all those in that stadium for the match.

For the future, we must put the stadium under a management body that has all powers to take decisions on crowd control, security and revenue generation.

It must have its own personnel that will be trained in ground management and crowd control, not the usual ministry staff who are not trained in facility management.

The act of closing down the security and communications networks, just because we are having an important personality coming to watch the match, should henceforth be stopped, because it puts the lives of many others at risk.

Also, the stadium has been well built with several gates to facilitate easy access and provide comfort and security for all involved, and we should stop the act of not opening these gates, even when the match has ended.

We can only do better in the future if we use the mistakes of the past to correct our errors now.

Olawale Alabi writes for the News Agency of Nigeria