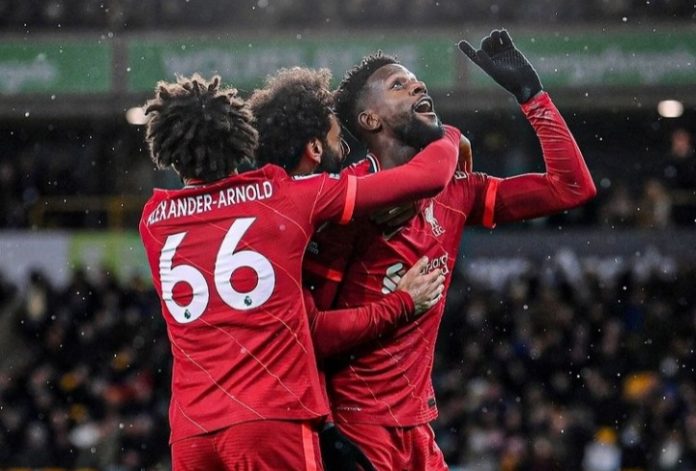 – Liverpool forward Divock Origi came off the bench and scored 94th-minute winner to edge past Wolverhampton Wanders at the Molineux Stadium on Saturday.

– Manager Jurgen Klopp’s side entered the match looking to capitalise on Chelsea’s 3-2 defeat away to West Ham earlier on Saturday, and they managed to see off Wolves despite a host of missed chances.

– The first half was a tense affair, with neither side managing a shot on target, although Mohamed Salah did find space at the back post after a brilliantly worked move, only to be denied a certain goal by Wolves defender Romain Saiss who intercepted and nicked the ball away.

– Liverpool forward Diogo Jota, playing against his former club on his 25th birthday, missed a guilt-edge chance in the second half as stepped past goalkeeper Wolves Jose Sa but could not find a way around opposing defender Conor Coady, who blocked the forward’s shot on the goal line. Klopp’s side missed another big chance, this time in the dying stages, as forward Sadio Mane failed to score from seven yards out following a deflected header from midfielder Fabinho.

– However, replacement Origi, who replaced midfielder Jordan Henderson on 69 minutes, struck the ball home from the edge of the six-yard box in the final moments of the match to secure three points for Liverpool.

I never asked Tinubu to quit for Obi – Ghanaian President

Real Madrid are the winners of Group D after a comfortable...

Ronaldo returns to Man U squad