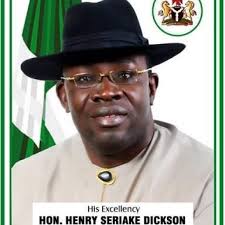 The Supreme Court on Tuesday struck out two appeals filed by Sen. Seriake Dickson and the PDP against a suit seeking his disqualification from contesting the concluded Bayelsa West senatorial election.

Dickson is appealing the Court of Appeal ruling which set aside a ruling by the Yenagoa Federal High Court that dismissed a suit seeking to disqualify him from running for the senatorial election.

Justice Mary Odili, who led five-member panel of justices, held that the appeals lacked merit and struck out both appeals after Dickson and PDP lawyers agreed to formally withdraw the appeals.

The apex court agreed with the lawyer to the first respondent (Owoupele Eneoriekumoh), Pius Pius that, having earlier filed a notice of withdrawal, he could no longer take further steps except to withdraw the appeal.

“Once a party files a notice of withdrawal, the only further step such an appellant could take is to formally withdraw the appeal, not to abandon the withdrawal notice and seek to be heard on the same notice of appeal.

Dickson had earlier applied to withdraw the appeal, but later changed his mind and filed a motion, seeking to have the appeal heard.

Also while striking out the appeal by the PDP, the apex court noted that the appellant filed a notice of appeal without specifying the judgment of the Court of Appeal that was being appealed against.

However, the respondents objected the motion, arguing that, having applied to withdraw for whatever reason, he could no longer change his mind.

The Court of Appeal, Port Harcourt Division, had on Jan. 7, 2021 ruled that the disqualification suit against Dickson was not statute barred and should be given accelerated hearing by the Federal High Court.

The three-member panel disagreed with the Federal High Court’s decision to dismiss the matter, saying the judgment of the lower court was wrong.

The panel presided over by Justice U. Onyemenam, explained the appeal was based on whether by the provisions of Section of the Electoral Act and Section 285 of the 1999 Constitution as amended, the originating process of the applicant was statute barred.

He, however, said the suit was filed within 14 days beginning from the publication of the particulars of the candidate by the Independent National Electoral Commission (INEC)’’.

Justice Jane Inyang of the Federal High Court Yenagoa had thrown out the suit filed by Owoupele for lack of jurisdiction declaring that the suit was stature barred for being filed after the constitutionally stipulated time to do so.

Owoupele’s lawyers lead by Pius Danba and Ebikebuna Augustine Aluzu had proceeded to the Court of Appeal seeking the court to upturn the verdict of the lower Court.

MURIC boss, Akintola, not fit to kiss my feet – Fanikayode